We left Zion, reluctantly, since we had such a great time there. Next destination was somewhere in the Las Vegas area. We headed for an RV park in the Lake Meade Recreation Area and crossed through some wild, dry, mountains and part of the Mohave Desert on our way to Las Vegas. One notable item was the Joshua Tree, in the Yucca family and exclusive to the Mohave Desert, which suddenly appeared as we crossed into Mesquite, Nevada. No pictures, since I was driving the whole time. By the way, we went from Utah, through Arizona briefly and then into Nevada (changing time by one hour to Pacific Time). Some pretty wild mountains to cross through. 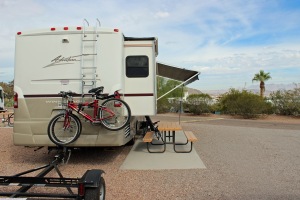 The RV park on Lake Meade was easy camping, even if it was tight quarters. We hooked up to water and electric and then headed over to Hoover Dam. It was a hot afternoon, over 90 degrees, but the walk around the dam was cool. Pretty amazing feat of engineering and design and we walked across while I tried to figure where the Transformers were positioned beneath (you had to see the movie). 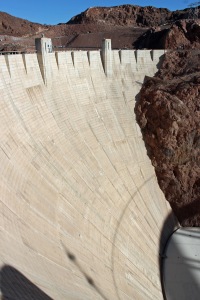 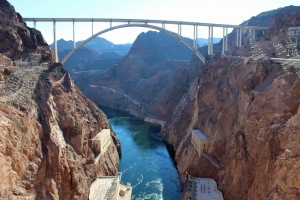 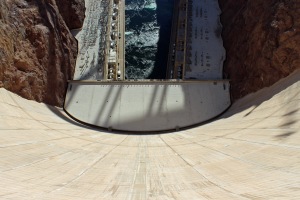 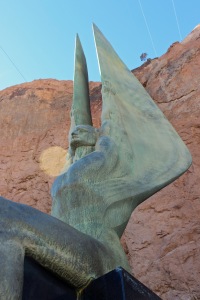 So much of the design is art deco style.

The new bridge that spans across the river and canyon just downstream is pretty amazing and we walked midway to have a look at the dam from there (but the price of admission to the visitor’s center and parking seemed a bit steep). Sad to see that the high water mark for the lake was the year it was completed. 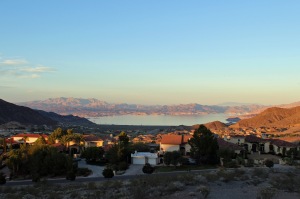 The view from Boulder City.

The town where the dam and campsite are located is Boulder City. The historic section of town is really quite nice. They have kept it looking like a 60’s boom town, with all the small motels and souvenir shops. Very classic. Brief mention that there was yet another brewpub: Boulder City Brewery. Good for a sample flight of six five ounce selections of their brews. Get this: on the way out of town, along the shoulder where there was some healthy green grass was a herd of Bighorn sheep. So we got some pictures, but they sure aren’t the “out in the wild” photo we expected to get. 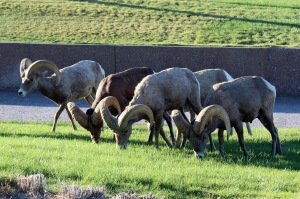 Next day was to be an adventure in Las Vegas. We drove to Emerald City to see the Wizard, parked and started walking the strip. One clever bit of engineering that I liked was the curving escalator at the Forum Shops at Caesar’s Palace.  They did trick you into walking around the entire level of the mall, though.  Whole lotta stuff going on and people everywhere.   As you know, every celebrity chef has a place or two in Vegas (where did those cheap buffets go?)  Can’t say I was impressed – too many homeless, panhandlers and just plain weird folk. Had lunch and came back to camp.  The day before we arrived in Las Vegas the Democrats were debating.  Then the big news was about Lamar Odom.  See what I mean about weird folk?  While we were sitting outside enjoying the view, we watched some strange birds running around. Finally figured out they were Gambel’s Quail (but no picture, since I didn’t have the camera). 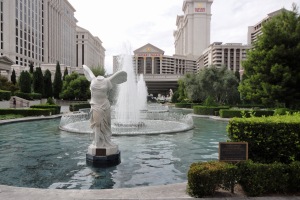 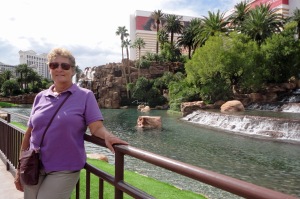 Was it all a Mirage? 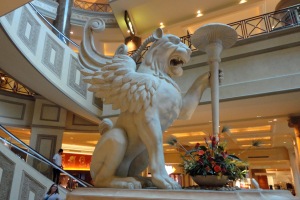 Not the sort of wildlife we were looking for.

A shout out to my brother Jeff, who spent his birthday in a tree stand hoping to get a buck with his bow and arrow. I hear his son Adam has bagged three does already.

We are headed toward the South Rim next, probably with a stopover beyond Kingman, AZ.

Hey thanks for the comments!