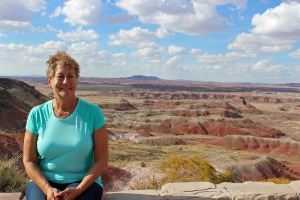 We said goodbye to the Grand Canyon and set off out of the park to get as close to the Petrified Forest and Painted Desert as we could. A KOA at Holbrook, AZ seemed to be the spot. We got there about 1:00 and were setting up in our pull-through spot when another, much larger motorhome pulls up to the spot at our front door. Now in KOAs you kind of expect less room around you, but this campground was maybe a quarter filled and we get a neighbor right in front of us?  Well, whadda ya gonna do?

We finished hooking up water and electric, leveling the RV and rolling the car off the tow dolly and Jackie pulled the car up close to park it. As we walked around the picnic table, out came the neighbors living room slide… getting closer, and closer and stopped. Honestly, if we had cranked out our awning, it probably would have hit their motorhome. Not that we planned to spend much time lounging outside our camper, but it just seemed a little “in your face, Winnebago.” So we left the porch light on all night.  Back at ya! 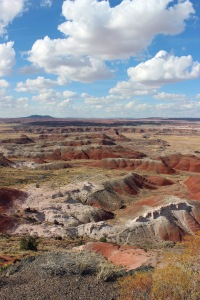 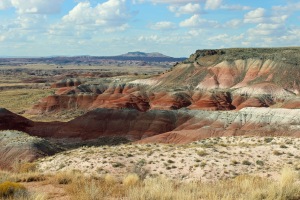 Back to the sightseeing. Since we were only in Holbrook overnight, we hopped in the car and headed for the Petrified Forest National Park. This was about 2pm. The park is a combination of Painted Desert at the north and Petrified Forest at the south. You exit I-40 and make one big drive through the park – 28 miles. Now the park was already about 21 miles from camp, so this was going to be a quick one if we were going to make it all the way through, north to south, and back another 20 miles to camp. Here is how to do the Petrified Forest on a time crunch: Jump out at the first overlook, “ooh, aah” snap the shot of the painted desert, jump back into car and drive to the next. For some overlooks the car stayed running… but we got the shot. 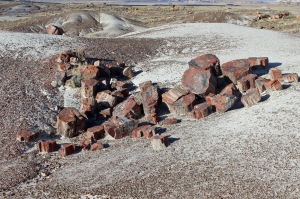 Tumble of logs in Crystal Forest

The best spot was the Crystal Forest, an easy mile hike around through lots of logs. These were really quite something. When you glanced at them, you saw bark, maybe what looked like scorch marks, sap and growth rings. Looking closer and touching them of course you find out they are rock – fairly smooth, polished and shiny rock. But all the characteristics of wood are there. Crazy cool. Have a look at some of these and tell me they don’t look like real wood. 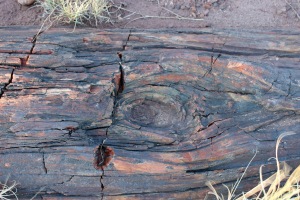 Seriously, this is rock. 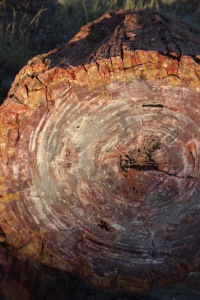 Bark and rings of stone. 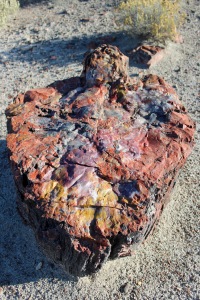 Amazing colors of the minerals 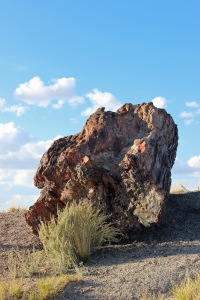 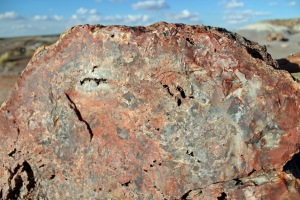 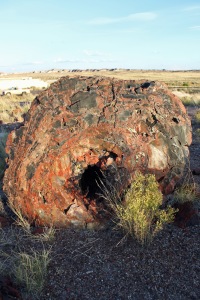 In addition to the wild wood, the sandstone formations had a different tint than we have been seeing. White, gray and bluish tints that were nicely striped. Again, something that looks like it belongs on another planet. 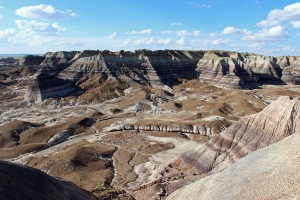 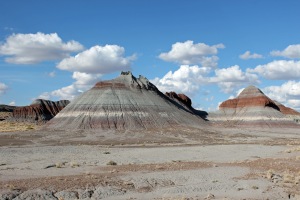 Ok, get back in the car, drive to the next, snap the shot, move on. We got back to camp by 6 and crashed. Overnight we had a little rain, but we got up and outta there early, since Albuquerque was a long drive and our next stop. The drive wasn’t too bad, although I-40 in Arizona is pretty beat, frankly. Lots of rattling and thumping over uneven pavement. You pass through more of the Navajo Nation and a few other native lands, each with casinos and some bypassed trading posts (mostly tacky). Historic Route 66 was in the same corridor as current I-40, so it mostly isn’t there. But there were signs for some bridges, motels and such that were along this storied roadway.

A glance in the mirror showed really dark clouds behind us and we pretty much outran a series of storms until we got to Albuquerque. We had time enough to set up camp before the rain hit, but it rained all night. The mobile home and RV park was pretty much in the heart of town, just a block from the Balloon Festival Park, where they had their big event a week or so earlier. But this was mostly a mobile home park with a few spots for RV’s. We had a nice level pull-through spot, so I can’t complain, but there were waaaay too many speed bumps in and out (oh my, did the camper rock about from those). 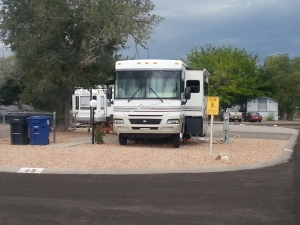 Jackie did laundry just before the storms hit, but ran out of quarters for the dryer, so we had wet laundry hanging everywhere in the camper. Not our best day. We got local news and learned that hail had hit the areas we just left and parts of Albuquerque, but we didn’t get any, thank goodness. Small leak over the windshield, tho, and we have to keep an eye on the drips on the dash.

There were about 6 or 8 microbreweries listed within blocks of our spot, but we really didn’t want to unhook the car to check them out, so we can’t really report on the brewpub scene in Albuquerque (darn). Hey, this unhooking and re-hooking of the car on the tow dolly is getting old, tho.

In the morning we pull out and head to Carlsbad.

One thought on “Painted and Petrified”