Leaving Carlsbad was another long day on the road, as we tried to get as close to San Antonio as we could. We got up and out quick, but as we headed east it was on and off rain, all part of Hurricane Patricia. We were told that the interstate that headed south was a pretty rough ride, so we took a 4-lane toward Hobbs and then southeast to San Angelo. On the way it was obvious that there had been flooding in many spots, although we didn’t have trouble on the roads. I did manage to spot a roadrunner perched on a shrub along the road. As we drove along and plotted how far we would make it, Jackie searched for possible spots to stay and we settled on San Angelo State Park. It sat alongside a lake that was mostly not there due to the summer’s drought.

The reason I mention cotton is that much of the area of Texas we came through was cotton fields. We actually saw them in New Mexico near our KOA along with beautiful orchards of pecan trees. Go figure, I thought I was back in Georgia for a moment. Maybe half of the huge fields were harvested, with the bales of cotton waiting to be moved to the co-ops. These were large rectangular tractor-trailer sized bales mostly, with a few of the round ones here and there. Lots of cotton.

At San Angelo State Park we had plenty of space around us in a nice, level campground. Maybe four other trailers in camp. One of the rangers caught up with us as we walked around camp with Benji and warned a severe thunderstorm was headed for us and to be alert. The worst of the storm slid just south of us as it rumbled along, but we did have a night of strong winds rocking us to sleep. 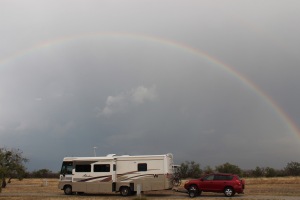 Got a full rainbow over the camper before we turned in, though. Nice touch.  We have noticed that the awning topper that comes out over the bedroom slide has decided to de-laminate and kind of shred apart due to UV damage. I picked up a handful of it the next morning in the next campsite over. Another thing to get replaced when it is back in the shop. 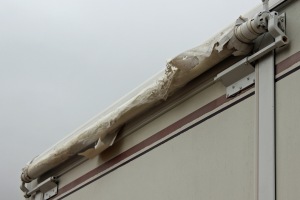 So off to San Antonio we went, hearing that there had been record rainfall in Austin, Midland and other parts of Texas. We planned to stay at a nice KOA in San Antonio that sat alongside the Salado Creek and as we pulled in we were advised there was plenty of room, since many campers had pulled out to head for higher ground. “Are we expecting flash floods?” “Well, on Memorial Day weekend the park was 5 feet under water, but it seems like the creek isn’t getting that high yet.” Hmm. From our campsite (the closest camper to the creek, by the way – gee thanks) we could see the swollen creek rushing past and tried to mark the water level to check later. It was sort of raining on and off so we really didn’t want to leave camp until we were sure which way the water was going. After an hour and a half it didn’t seem to be getting worse, so we made a quick trip into town to scout out Alamo Plaza and such. 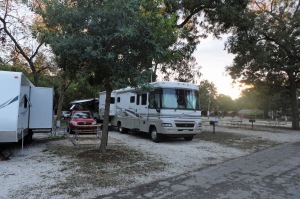 We were able to visit the Alamo Shrine and walk around the grounds and found some of the access points for the Riverwalk. Back to camp (only about 5 miles) and everything seemed about the same. The local news spoke of a man being swept away in the rains. It was a restless night of wind and wondering, plus “thunk” and “thwack” as pecans hit the roof. Who would plant pecan trees in an RV park? Sheesh. 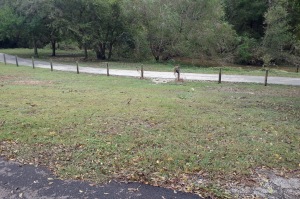 The plan for Sunday was to take our time and get into town around noon. We checked the creek and discovered that not only was it down, there was an entire bike path beside it that was now visible. More water than we realized. 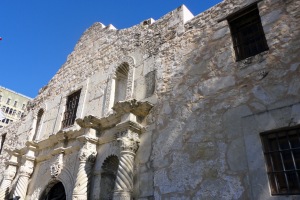 It turned out to be a beautiful day, sunny and warm. The Riverwalk came alive and so did we. We rode one of the river barges, learned about the San Antonio River and local history, joined in a Day of the Dead Festival nearby, and sampled the food at County Line Barbecue and Republic of Texas. One level down from the street and it is a magical place. Highly recommended if you get the chance – and do take the barge, it was fun. 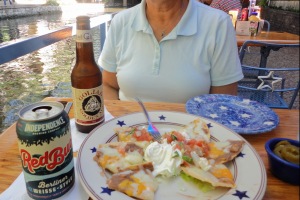 Next stop we are hoping will be Beaumont, Texas or further. New Orleans is in our sights.

By the way, we learned the man who got washed away looking for his dog was found safe, along with the dog.

Hey, thanks for checking in.