Off we go to use up our accumulated days of timeshare before we turn it back to Wyndham through their Ovation program.  We have a plan to spend 5 days in Washington, DC and 2 days in Manhattan (totally not enough, but this will be speed sightseeing!).

This time the RV stays home and we hit the highways in the Scion.  Along the way we plan to stop by some of the places we remember from our past.  In Doug’s case it will be childhood neighborhoods in Delaware and New Jersey; for both of us it will be our first house in New Jersey and the above-the-office apartment we rented for that first real job.

UPDATE:  We are now home from the adventure and I can now post some pictures and share some stories.  I’m going to add some information to the Foodie page, post lots of pictures to the Gallery page and hopefully keep your interest.  Next blog page will be devoted to the New York stories, so you will want to check that out as well.

So can you really go back and re-live the days of your childhood by visiting all those great neighborhoods and places you remember?  Have they changed much in 55 years or 30 years?  What will you find?

On the way from Washington, DC we drove to the Newark, Delaware neighborhood where Doug’s family bought their second house.  While it was being built we stayed just down the hill in a small brick rental.  What are some things I remember from that time?  I recall going to Junior High for the first time, a late Spring snowstorm that with snow so deep we built an ingloo to play in, lining up to take our sugar cubes with the Polio vaccine, playing in the creek behind our houses and mischief night fun in the neighborhood (that was the night before Halloween when you could pull pranks on your neighbors).

The second house Doug’s family grew up in, circa 1961/62 (and YES we had real snowstorms back then).

Not much had changed after 40 years or so…

My sister of course remembers the time my brother chipped her front tooth (the cap for which she is just now replacing once again).  I recall the time in the rental house when our hamster got out of his cage, never to be found again.  It caused great panic for my great Aunt who was babysitting us that night and had already named it “that rat.”  I was sure we would lose both the hamster and my great Aunt that night before my parents returned!

Our rental house and scene of the missing hamster caper …

The old neighborhood looked pretty much the same, except grown-in much more.  I sure thought we lived on a hill with a steep front lawn, but by the looks of it today it was really just a gentle slope. I wonder if the pachysandra and hosta out front are the same ones that mom planted so long ago…

Further on into New Jersey and we crossed toward the shore and River Plaza, which is just next to Red Bank and along the Navesink River.  Small world indeed, one of the guys on our DC Brew tour lived in the same area and we had been talking about some of the landmarks.

Ok, my elementary school was old even back then.

I found my way to River Plaza Elementary, turning just after Chris’s Delicatessen (still there) and was able to chat up the front office staff there.  Yes, this is the school I went to for kindergarten and first grade and would it be possible to have a look around?  Students won’t report until after Labor Day (wow) so I was able to check out the all-purpose room and hallways I once walked.  The all-purpose room was that combination of raised stage, gym and kitchen area where you ate lunch.  All I can recall of lunches was that on Thursdays you could buy a hot dog. Still K-5 with about 275 students.

Around the corner and down a hill toward the marsh was our neighborhood.  Found our old house and met the nice couple who live there now, Mr. and Mrs. Cunningham.  We shared some memories of the street and who was still around, who is gone.  The Moores, Mansons, Kulas and Culises.  The empty lot next door where we used to disc and sled during snowstorms was still called the Elephant Pit, even though there was now a house there and I doubt it was ever an elephant graveyard.  Some of the great trees with rope swings along the banks of the marsh (that led to Dutch Neck, a netherwoods area that only the brave would wander into) were gone, victims of recent storms. 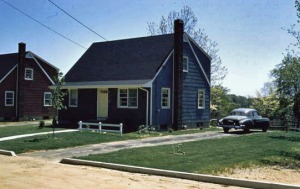 Doug’s family’s first house, circa 1953/54.  I guess it is “midcentury” now.  The style was the same as one that Jackie’s family had growing up, too: Cape Cod (with the unfinished 2nd floor). 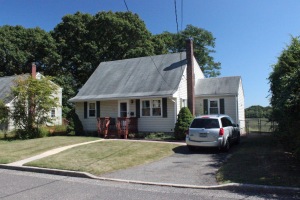 The house in 2016. We met the current owners and shared some “whatever happened to ..?” moments.

Were we crazy then or what? Look how bundled up we were, but we HAD to get our ice cream!

Not much had changed in 50 years really.  This was a neighborhood where you came home on Halloween loaded with a bag of candy and treats, where your parents would shout out and call you to dinner at night, where we all learned to ride 2-wheelers and I tried out my first skateboard… which was indeed a metal skate nailed to a 2×4 for which the skateboarder (victim?) was pulled by rope behind a bicycle.  I still have dirt from that road embedded in my left knee.

Whirlwind 4-day tour of our nation’s capitol was a blast, even though it was still very hot (90’s).  Our timeshare was in Old Town Alexandria next to a stop on the Metro.  We bought an unlimited pass and learned our way on the blue, green and yellow lines quite well.  So what sorts of things did we do in Washington?  Saw all sorts of museums, memorials and historical artifacts that made us appreciate the significance of our country even more.  Really reminded us that our nation’s founders set a grand plan in motion that has been representative and responsive and functions well, despite the current election-year rhetoric. 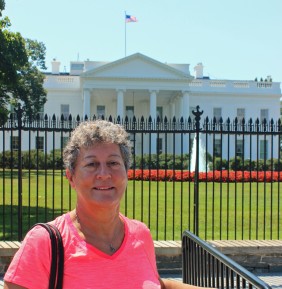 We toured and visited: 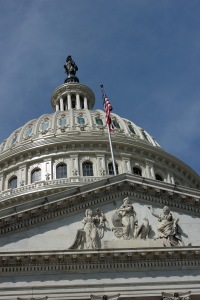 Washington is such a photo-rich city with statues and flags and impressive buildings and marble everywhere.  It is going to take me a while to sort through all my pics, but it was so beautiful to see, even if it was way hot and humid.  A few tours were extra-special and worth the time to try out:

Have you ever tried a Segway?  How about with a dozen others as you zip along the roads, sidewalks, paths and grounds of DC?  We loved it!!  After a quick training with City Segway Tours, we were off to explore the memorials of the National Mall at night.  Off we went like a swarm of bees, heading to see all these spots, most of which were quite different lit up at night.  A few could not be appreciated as well at night, such as the Vietnam Veterans and FDR Memorials.

We saw the Washington Monument and memorials to Lincoln, Jefferson, Franklin D. Roosevelt, Korean War, World War II, Vietnam Veterans and Martin Luther King.  We stood on the steps of the Lincoln Memorial and looked out across the reflecting pool as MLK did.  And we were quite surprised at the large crowd of folks at the FDR Memorial who were… playing Pokemon Go. 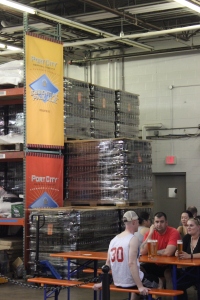 Gotta try a brew tour, so we went with DC Brew Tours and joined a young couple and 9 guys on a bachelor’s party (we were worried about that, but it was cool… even the blow-up girl they brought along).  We hit four breweries that were a real cross-section of how it’s done.  First stop was Port City Brewing for a great Weiss beer and an atmosphere much like our local spot at home.

We then hit a gastropub, Capitol City Brewing, for a much needed plate of grub and a sampling flight.  Third stop was a small neighborhood brewery (Public Option) with some of the operation in a garage out back. 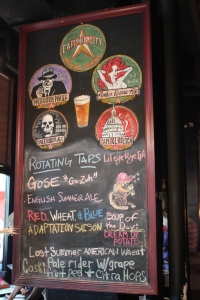 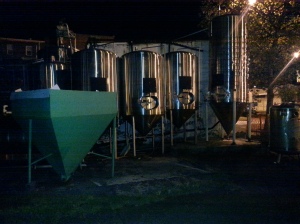 At least it was a clear and dry night.

As we closed out the tour we headed to the van, one that very clearly says “DC Brew Tours” with a large mug of beer on it.  We all have our large tour lanyards around our necks as we load in to the van.  But just as we pull away from the curb, a Metro police car pulls out behind us and we are stopped.  Our driver was very professional and had not had a touch of beer all night, but of course was quite rattled as he tried to find the registration card for the van.  We were told the area had a lot of suspicious activity and drug deals, however we checked out.  Umm, I figure it was pretty obvious what we were doing in the area, but I respected their diligence.  Didn’t help that the guys in the back of the van kept sending the blow-up doll forward in the van… “crowd-surfing.”  Ah well, a little extra excitement, no charge.

New York City is our next adventure, so be sure to check the next posting for pictures and stories from the Big Apple.  And check the “Places Gallery” for plenty of photos and “Foodie” for more stories.

One thought on “Monuments, Memorials and Memory Lane”