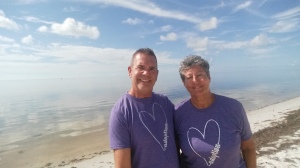 Adoption Day for our granddaughter!

It’s about 85 degrees early this morning, with bright sun, blue skies and a warm breeze as I sit outside facing the water and get caught up on our wanderings.  We are camping beachside at Curry Hammock State Park and it is indeed a quiet start to another hot Florida day.  It has been a week since we left John Pennekamp Coral Reef State Park, counting down the mile markers to the end of the road.  A highlight of the trip as we left Marathon was 7-mile bridge, which somehow has this magical attraction.  Parallel to the new bridge is the old one, a remnant of the East Coast Railway and later the original Overseas Highway.  But you may know it best, as we do, from the movies.  In particular, True Lies, where Arnold Schwarzenegger pulls Jaime Lee Curtis out of a speeding limo at just the right moment.  Is that the limo I see underwater just there? 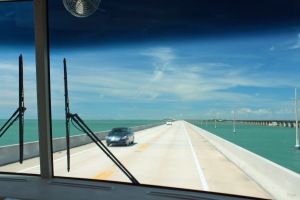 I should probably pause to say that I consider our adventures to be well planned – mostly because if you want to be in state or national parks, you have to reserve well in advance.  But sometimes you miss a few things, such as September is still really hot in Florida (90’s) and Bike Week in the Keys happens right now (about 10,000 or more motorcyclists).  We knew about the hurricane season and kept our fingers crossed, but somehow missed the Poker Run. 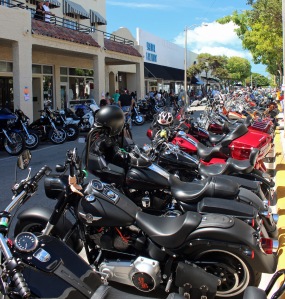 But it’s fun when the unexpected happens.  For instance, our next few nights were in Bahia Honda State Park and we discovered it was a really nice island with views of the overland highway and old Flagler-built East Coast Railway bridge. It is one of the few keys that has sand beaches that are nice to relax on or in (we sat the chairs in the ankle deep water for most of the day). We signed up for our second reef snorkeling adventure, only to learn that the boat was in need of a part for repairs and the trip was canceled.  Next day as we were awaiting the part – oh the part is in, but the mechanic is out – canceled again, there was a lot of buzz about “the movie.”

Campground set of “The Leisure Seekers”

On the set of “The Leisure Seekers”

Down by the nature center there was a crew setting up for a shoot, complete with some vintage campers, tables, grills and such and lots of cameras and equipment.  Actually, this wasn’t even part of the campground.  Someone said it was a film with Donald Sutherland and Helen Mirren.  We watched and wandered about, got waved out of the shot and tried to figure the smoky scene, which looked like some grilling gone bad.  It is “The Leisure Seekers,” a story about a retired couple who set out in their vintage Winnebago RV on an adventure of a lifetime.  Hmm, sounds kinda familiar.  We probably saw both actors, but who could tell?  Shorter in real life and all… 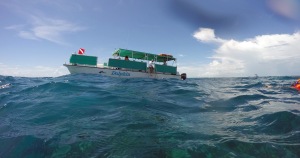 As we learned that our snorkeling trip was canceled yet again, we quickly checked with the nearest dive boat and got ourselves on for a run to Looe Key – a marine sanctuary reef that was supposed to have reef sharks and goliath groupers and spotted rays.  Very clear water that was a different reef than Pennecamp, deeper and lots of fish and coral: parrot fish, French angelfish, barracuda, yellowtail snapper, sergeant major, blue tang, some grouper, fan coral, elkhorn coral and some low-flying frigate birds circling.  But we didn’t see the reef sharks (some folks did), goliath grouper or spotted rays.  We did see lots more moon jellies and just as we were headed back to the boat, Jackie got nailed along the neck by one.  Ouch!

Christ of the Abyss

The boat moved to a spot where we got to see several large green sea turtles from the boat, one might have been a Loggerhead.  Overall great afternoon, despite the jellyfish sting.

The beach at Bahia Honda

We really do like the Florida State Parks – they are clean and very dependable for hookups and campsite conditions.  Bahia Honda had some beautiful sunsets and we got to ride bikes along the shore, paddleboard and bird watch (no spoonbills or swallow-tailed kites yet, but a nice osprey).  The Keys are not really beach scenes. To appreciate them you need to get out on the water and fish, snorkel the reefs or paddle around.  They are rocky coral and pretty darn shallow and there is lots of weed at the water’s edge. And no waves – no sounds of the roaring surf, hardly even a ripple.  We got to chat with others about where they had been, and “you’ll love Key West, it was so quiet in town yesterday – even with 2 cruise ships in port.  Empty.”  Right.

So off we went to check in at Leo’s Campground on Stock Island (the island used to be the stockyard for Key West), which is maybe a half-mile from new town Key West. Umm, not so easy to navigate back to the site.  We unhooked the car and pulled forward, but needed to do a K-turn, which just wasn’t happening without the tow-dolly getting tangled up with an old Dodge van (oops, sorry, did that leave a scratch?), so I turned around, started over and backed all the way in, with Jackie’s help. Usually the private campgrounds are more like wide-open parking lots, but Leo’s not so much. Well, the dino-sized iguanas were amused at least (and it seems our site was next to the official feeding spot for these 4 and 5 foot guys). Remember, always the unexpected! 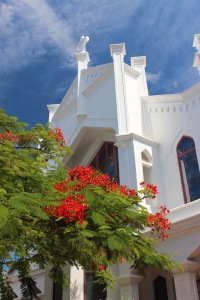 Key West awaits, let’s see what it’s all about.  We drove in and parked ($$) near Mallory Square and Duval Street, which was blocked off for the bike event, and tried to get a flavor for Old Town Key West.  Stayed for the sunset celebration on the waterfront along with a zillion selfie-takers and wedding photos.  We returned on Saturday, but this time we parked at Higgs Beach in free public parking and then bought a trolley ticket to get around.  So what did we find in two days in Key West? 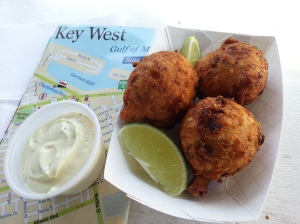 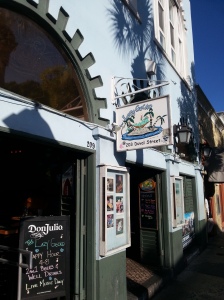 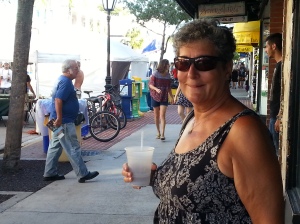 The trolley tour told a little more of the local history of a town that has been one of the richest per capita more than once: 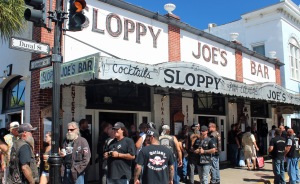 So we did as many of the usual tourist things as we could all the while dodging the motorcycles.  Parked all down Duval Street, the lineup of bikes was crazy and the crackling motors and impressive sound systems let you know they were there. Since we forgot our tattoos and leather vests, and I have been shaving regularly, we probably stood out, but the crowd was really very friendly (but black leather in mid 90’s heat meant the watering holes were pretty busy). Our picture of the Southernmost Point in the US was a drive-by and it was crazy that there was a line of 50 or so folks waiting to take selfies with the cone.

Sunset at the end of the road…

Starfish on the sandbar

Still no spoonbills, although I did see a kite soaring over the waterfront while driving (darn!), and even though Big Pine Key had all sorts of warning signs about key deer (and as you know, we have quite the reputation with deer) we were for once disappointed not to see deer. But you never know.  We still have a few days left before we head out of the Keys and back home.

It is just so tough paddling around the keys!

Oh wait! We heard about manatee being in the area today so we quickly grabbed the boards and got in the water.  After paddling around a bit, we were over and around five really big manatee in the water.  They would surface, snort and then go back under and swim along.  Big, big, big!  So much fun to paddle over and around them, ever watchful that they might just toss those back flippers and send us swimming!  How cool.  I got some video before the battery went dead (of course), so will post that soon.

Ok, as I finish up this post, the “little” iguana is advancing on me … followed by three more of his buddies.  I think they replace the pesky squirrels or pigeons who beg for food – except these guys are fast… and long.

Next Adventure?  Not sure. Need to spend some time at our “other” home.  When I get home I will post some of the great pics and videos from our trip!

PS. This is our first trip without Benji, our beloved adventure dog.  It seems empty without him sometimes, but we know he is traveling with us in spirit. Merlin and we miss him and send him a heartfelt shout out.