RV Fixes and some Frisky Dolphin

So when we last checked in with our non-cruise adventures, we were headed back home from Panama City Beach with oil pressure problems (ding, ding, ding – can’t drive faster than 45 mph) and no hot water flow in the motorhome. It was a great beach vacation, and we were welcomed home by our herd of deer (at least 3 – 4 fawns this year), but we did have a few “oops” moments.

Back home we quickly changed gears, put the motorhome away and packed our bags for Alaska. If you read that posting, you know how awesome the cruise and whale-watching were. But soon we were back home again, taking stock and figuring what came next. Well, there were several fixes that were needed, and thanks to a visit by Jackie’s brother John, we had one more adult scratching his head over the hot water problem. We all agreed it must be the backflow check valve, but the solution still evaded us.

The previous week I took the motorhome back to the folks who changed the oil just before we winterized and they said the only thing they could figure was that there was too much oil in the engine, causing oil pressure problems for the regulator. I confessed to adding one quart, but they drained an extra 5 to 7 quarts out of the engine (which by my reckoning was their fault for not properly draining and refilling the oil in the fall). They did find a bad spark plug and performed a tune-up, so now the engine runs much smoother and we don’t seem to have the oil pressure problems. One problem solved, then.

Back to the hot water — it seems the check valve is at the very back of the hot water tank and nearly inaccessible. We could barely reach around the tank and found the elbow fitting as it left the tank, but beyond that, pretty impossible to mess with. John took a small hammer and tapped at the elbow a while, hoping to dislodge the ball valve, but no luck. On to the slideout problem then.

You see, just as we were packing up to run ahead of the tropical storm that was about to pound Panama City Beach, the slides barely retracted, squealing all the way. Something was not right with the hydraulics. But it took us several YouTube videos and internet searches, plus looking all over and under the engine and chassis to actually find the hydraulic fluid reservoir. Some mechanics we are! Once found, it was very low on fluid. So three quarts of transmission fluid (recommended) later and we had operational slides and jacks that worked just fine.

But still no hot water flowed through the pipes. Plenty hot in the tank, just not leaving the tank. “Hand me that hammer one more time,” John said. Tap, tap and presto! We finally had hot water flowing through the pipes. Yes, that was one tricky problem that was finally solved. I still wasn’t happy with the water pressure using the water pump, so I ordered a stronger, quieter replacement, and we had much better water pressure while off city water service. Ok, then, we were ready for another short trip to be sure everything was working fine.

On to Hilton Head Island … 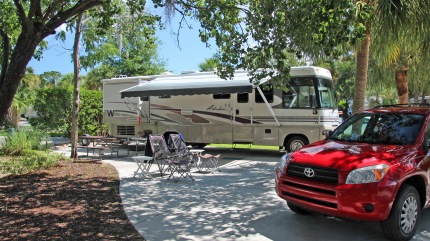 It was time to check in with Dad in Hilton Head anyway, so we booked a couple nights at the HIlton Head Marina RV Park. This is a park where the sites are owned but rented out by the owners when they are not in town. Very nice location of the Intracoastal Waterway just as you land on the island. Found a great spot and hooked up, leveled up and checked in with my brother and Dad.

Low tide at the dock

We were lucky that Jeff wanted to head out in his boat, so we spent Saturday on the water. He put the boat in from the Oyster Factory in Bluffton, ran down the May River and we met him at our dock — what service! Vicki and her sister Sharon were onboard and we headed out to Harbor Town and South Beach on the Sea Pines tip of HHI. Nice sandy beach along the inlet, with very refreshing water to bob along in. We gazed at the houses along the shore of Daufuskie Island and then along the waterways of Hilton Head Island on our way back. The tide was up as we motored down Broad Creek and into Shelter Cove marina to drool over the gorgeous boats in the harbor.

… and the Frisky Dolphin 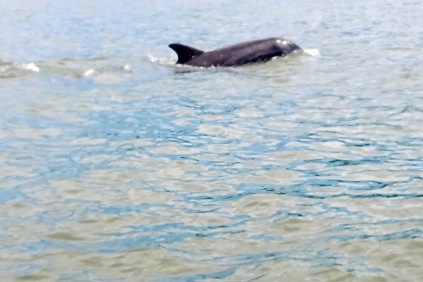 As we passed under the causeway bridge we spotted some dolphin, something we are all pretty used to seeing. Except that these were very active. It must have been a pod of 20 to 30, with youngsters mixed in. They were tail-flipping, rolling on their backs and just pinwheeling all around us. A little chat back at the dock and we learned it was mating season, so that explains the frisky behavior. We really had not seen that much activity from so many at once before.

Next day we met up with Dad at his apartment for brunch (two omelettes!) and shared stories. Good visit followed by some time in the pool at our RV park and talk of maybe spotting some manatees in the marina (no luck, however). While floating in the pool with some good craft beer (Holy City Pluff Mud Porter) we struck up a conversation with some other craft beer lovers from South Carolina and Virginia. A lot of suggestions were shared, plus good reports of the campsites at Devil’s Backbone Basecamp. We are going to look at that, since we already planned to stop there on our way back from Maine this fall. Always fun to make new friends in camp! 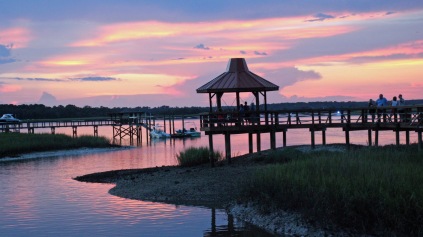 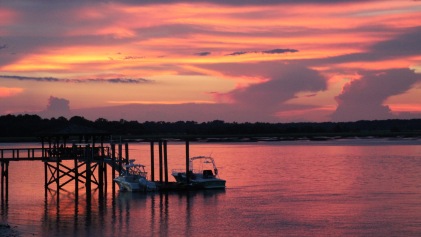 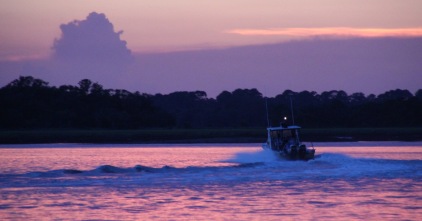 Later, while taking pictures of the beautiful sunset, a father and son were at the fish-cleaning station working on some nice size Cobias. Never caught them, but they were reminiscent of some of the big bluefish and tuna we would catch off the New Jersey shore. 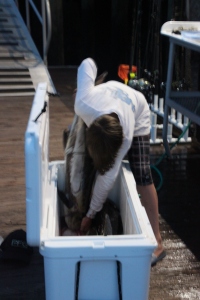 I couldn’t stop snapping sunset pictures, since it was such a great evening on the water.  Nice time so far, even though the temp was in the 90’s. 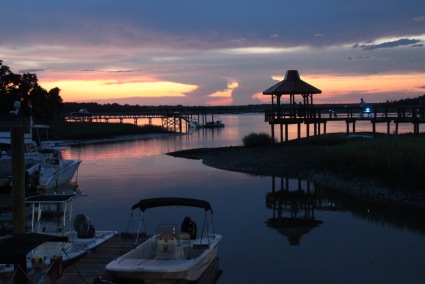 Oh, but we did have another one of those “didn’t expect that” moments.

It was almost too good — engine was running nice and smooth, slideouts working just fine, hot water flowing in the shower and sinks. Life is good. Oops, the fridge doesn’t feel so cold, in fact that beer is almost warm! Hmm, looks like an error message on the display. Try to run the fridge on LP gas – nope, that didn’t work. Go back to AC or Auto – nope, still a “reset” error. Oh, the book says that one requires a technician to repair. Great. Ran to the store, bought a cooler and ice and did things the old-fashioned way. So, everything is cold, just not the way we expected. And another trip to maintenance shop, since I don’t think I can solve this one by myself. The more I read about it, it seems to be a lockout problem, where the power board needs to be reset.  Well, at least this didn’t happen on the first day of our fall 6 week trip to Maine and back. Now THAT would have been a big down arrow.

Not complaining here, just explaining how life with a motorhome goes, for all the newbies who might be reading.

So goodbye until the next “oops” moment, or better yet the next amazing adventure!  Be sure to roam around the site and check out all the photos of our past adventures. Our next trip is north to Maine and the fall colors, but I can’t guarantee how quickly I will be able to post about it. Just “follow” us and you will get a note when it happens. 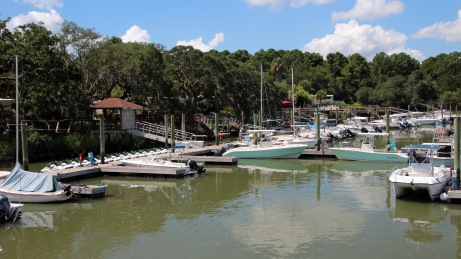 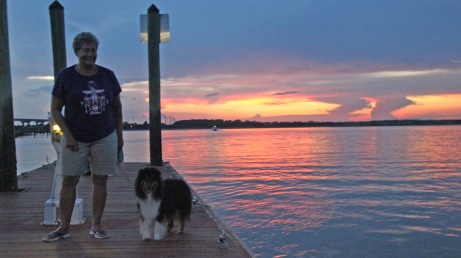 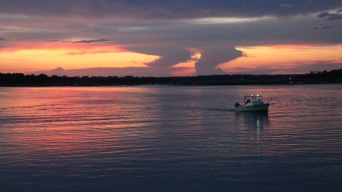 Low tide at the dock

3 thoughts on “RV Fixes and some Frisky Dolphin”