It is now Day 5 in Acadia National Park and we roll out in the morning, heading to the upper coast of Massachusetts. If you haven’t been following along from the start of this trip, be sure to scan back to some of the first postings to see our travels from Atlanta north to Canada and across to Maine. 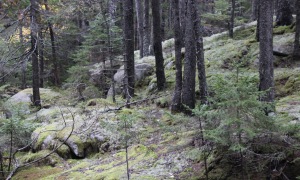 When we last left off, Jackie was washing some essential clothes in dishpans on the picnic table. Those got draped over a drying rack in the living room and two days later are still damp. Rain was expected yesterday and indeed it rained all night and the day started just as wet. That’s ok, we needed a break day to shop and do errands instead of exploring the coast. Sounded like a good day for hot oatmeal so with the generator running, all the phones now charging, microwave heating the oatmeal and electric water heater on, we put a Keuring in the coffee pot and …… nothing. Oops moment again. All electric down. “Captain, I’m givin’ her all I got.” Time to run a diagnostic.

Generator was running just fine, it just wasn’t sending current – and since we went past 30amps, something we know not to do, it was probably a circuit breaker. Flipped the breakers one at a time, no change. Turned everything off, then back on again. Nothing. Ok, read the manuals again and scan for the solution. Ahh, there is another flip switch on the side of the generator that needs checking. Yep, reset that and we are back in buisiness. Another reminder that you have to watch everything.

Still raining, and pretty hard, so we packed up the dirty laundry (except those on the “drying” rack) and went in search of a cell signal and laundromat. Still colorful and scenic along the coastline, but much rougher water and getting pretty socked in.

Just off the island (Acadia and Bar Harbor are on Mount Desert Island) we found a Walmart and laundry. Bought some fresh groceries, then filled a washer and dryer at the laundromat while checking online. I was able to post two blogs and check emails, Jackie downloaded another eBook and we learned about Hurricane Michael hitting the Florida panhandle. Yikes, not good.

Since it was still a nasty, cold, wet day, we headed for downtown Bah Ha Ba. Crowds were down and we heard that only one of 3 scheduled cruise ships actually decided to stop in port. But the bus tours were still moving around. I had lobster in mind, not knowing if it was in season or not. Plenty of shops advertised it, so we chose Side Street Cafe and loved it. Nice big lobster roll with the meat from two lobsters! Jackie had halibut tacos and we both sampled local beers. I tried Belfast Lobster Ale (seemed appropriate) and Jackie had the Real Ale from Atlantic Brewing. That was a nice brown ale we liked from around the corner. Their beer is so good that we walked around to buy some of their Thunder Hole nut brown ale to take back home. On the way, passed a large rafter of turkeys, again!

Rainy night back in camp, but we are pretty full, so just crackers and good Vermont cheese and apples and tucked in for the night.

That brings us back to Day 5 and what to do. The laundry that didn’t make it to the dryer is still damp, there is lots of condensation dripping down the windows and it is still wet outside. Water is running low onboard, so quick, simple showers will have to do. Clearing is forecast for the afternoon and we have decided to drive around to find the only lighthouse on the island. Let’s see how that goes. Probably more turkey sightings.

Cold morning to start off, overcast and spotty rain as we began our last full day in Acadia NP. We did drive west around Northeast Harbor and then down past Southwest Harbor to the Bass Harbor Head lighthouse. Almost unimpressive size-wise (we are used to these tall structures) but we did have a good look at it and the ocean. 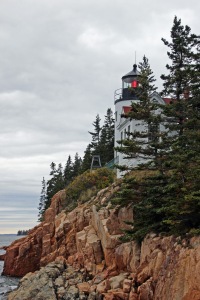 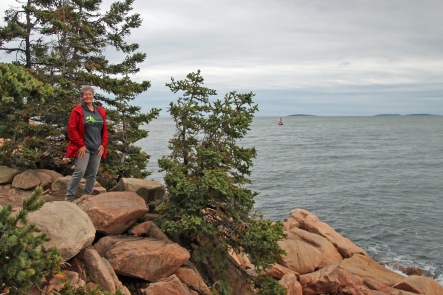 Back around the island we stopped at a couple other ponds and searched for beaver and loons, but all we saw were turkeys once again. 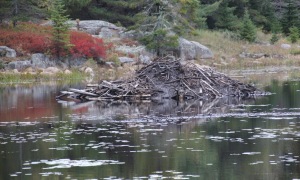 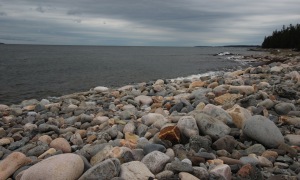 We found a delightful little bakery “The Notch” and picked out a crusty french round and two blueberry tarts for later. At the campground we walked the trail to the waterfront with Kodi and took pictures and had a last look at the coast. No sunny afternoon, however, and temperatures were dropping. Good night for tomato soup and toasted cheese with that crusty bread and Vermont cheese with bacon! And blueberry tarts! 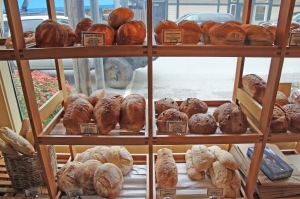 Morning again, but thankfully no rain overnight. It was 43 degrees out, so time to hitch up and start south. Tried to drive the coast road as much as possible to Augusta and Portland and passed through some really cute towns, several of which were having their fall festivals, and over some really cool bridges. And more turkeys along the roadside! They don’t even rate their own “crossing” road sign, but there they are. Unfortunately, the rain started up again and it was a wet drive to Portland.

We made a swing through Freeport with hopes of stopping at the L.L. Bean flagship store, but it was Saturday and the whole town seems like one big shopping mall – the expensive kind. One look at the tight streets and full parking lots and we decided to keep moving and shop online. I did see the big boot, though. But our goal of finding a brewery was rewarded with a small industrial park in Portland that had six breweries within walking distance. 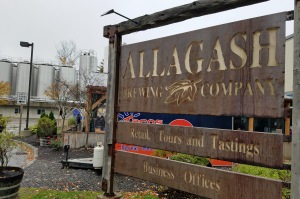 We hit Allagash and Foundation breweries for some flights and met some great folks. Allagash had a raspberry chocolate beer (Ganache) that I liked, Jackie had an ale aged in oak barrels that was light in color and really good (Curieux). Haunted Manor was a Maine exclusive dark, hoppy porter that was tasty, too. At Foundation Brewing we thought the Helles Lager was very flavorful and I liked their Chai Swizzle Gose. Quite a crowd at all the breweries for a rainy Saturday afternoon.

An hour’s drive or so through New Hampshire’s small coast and into Massachusetts to find Salisbury State Park and our campsite. Front gate had a note to just go find your reserved campsite and we soon learned there was a Vintage Camper Rally going on. How nice that our site was adjacent to the main event tent. Yippee! 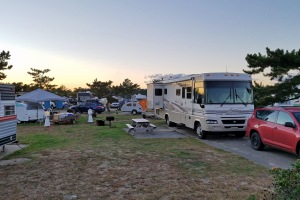 We took Kodi for a quick walk along the inlet and the beach, then back to the van where electric hookups means everything gets charged and we have heat. Good thing, too, since it is going down into the low 40’s tonight. We are here for two nights, with a day exploring around Gloucester Harbor tomorrow. 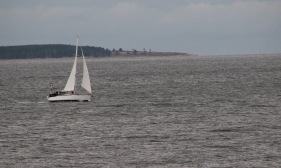 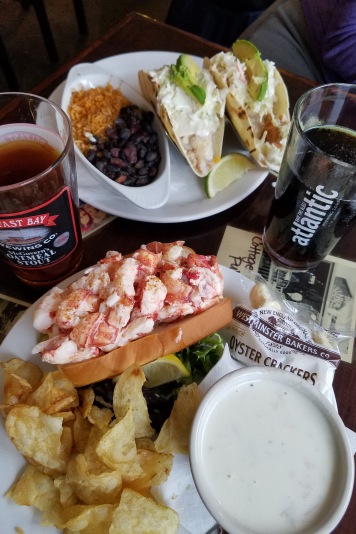 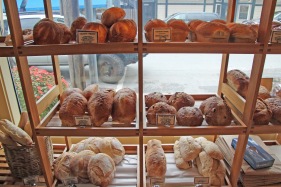 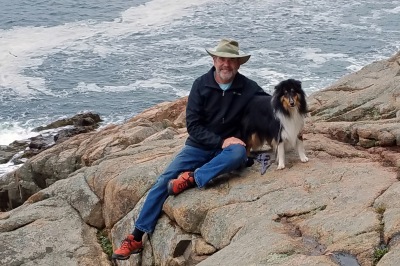 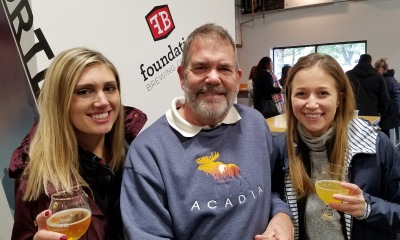 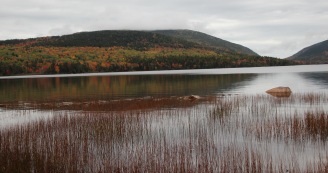 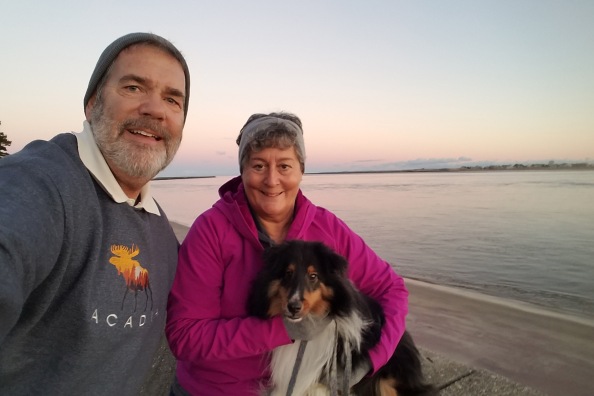 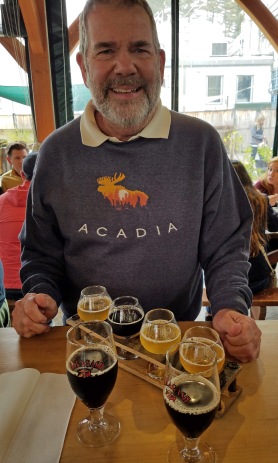 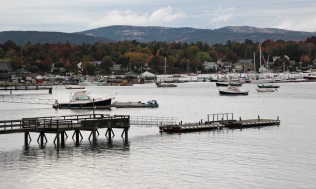