A month along the Florida coast, soaking up the sun, snorkeling in the clear salty water, chilling on the beach with a cold beer. It was going to be a relaxing time away from isolation at home. That is until Tropical Depression 19 (yes, the same no-good 19 that hangs with COVID), turned our triple play into one big foul play. 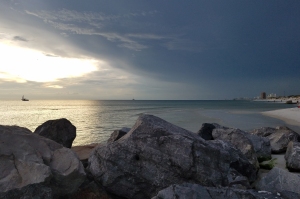 As the storm moved into the Gulf of Mexico trying to become Hurricane Sally barely a day after we arrived in Florida, we were told that St. Andrews State Park was closing at 3 PM. That meant we had to scramble to find alternate arrangements. Jackie got on her phone and found that there was a spot at Falling Waters State Park, just an hour north of PCB in Chipley, Florida. We booked two nights, hoping to return to St. Andrews once things blew over. Since the campground at St. Andrews sits barely a foot or two above sea level, it was all but certain that the 3 foot or more storm surge, combined with heavy rain, was going to flood the entire campground. So, off we went to the north.

Kitesurfer as the big winds kicked up! 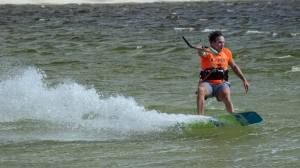 Longer hair can be a pain!

Even feathers get ruffled

Much of the park remains untouched since Hurricane Michael.

Last one to leave …

Well, someone is happy

It wasn’t too bad breaking camp on Sunday, since we had pretty much pulled everything in the night before when a nasty thunderstorm blew through. That meant we had Saturday at the beach and some time early on Sunday. We had no problems getting to Falling Waters, and were chuckling a bit since we had a night booked here later in the month anyway. So we leveled up and hooked up, waiting for the rain to begin. This seems like a proper spot, since it is one of the highest points in Florida, although we were advised in the afternoon that we MIGHT be asked to evacuate if the storm moved east. Doubtful.

But before all that we took a short hike to the waterfall and sinkholes at the park. The tallest waterfall in Florida (75’) is certainly different, as it spills into a deep cylindrical sinkhole of limestone. Pretty cool. Upstream there was a small lake that was open for swimming. However, as you can see from the swimming area, there was a mixed message – swim, but please avoid the gators.

All in all it wasn’t a bad spot to ride out the storm. We had books, crochet and a few DVD’s on hand. But by lunchtime the second day (this is now Tuesday morning) we had the knock on the door to tell us the park was evacuating everyone. Back on the search for our next spot (one that would be northeast of the coast but not too far away) and we located a spot on the southern side of Lake Seminole at Three Rivers State Park. It was already raining pretty steady and we both got soaked as we first did a dump of grey and black water, then connected up to electric and water, leveled up and put out the slides. We were just along the shoreline of the lake, but the place had taken a pretty big hit from Michael two years ago and the trees were pretty sparse. Well, it was only for three nights and, fingers crossed, we might be able to get back to St. Andrews.

Lake Seminole in the distance

Fun Fact:  When the ground is saturated with water, fire ants love to float by, grab your ankle and, well, bite.  Good to know for the future.

Rained all night with three tornado warnings for PCB vicinity and alarms about flash flood alerts. As we were having early morning coffee (on Wednesday) I suggested we get dressed just in case and sure enough we got another knock on the door to say they were evacuating the park and we needed to head out. That meant another scramble on ReserveAmerica to find availability somewhere well east of us this time. We booked a spot at Gilchrist Blue Springs State Park outside Gainesville, about 3 hours away. Drenching wind and rain this time as we pulled in the water and electric and hit the road. It was blinding rain driving on I-10 with the wipers on high and trucks throwing up spray and splash. We decided for this trip not to tow the car, which now meant Jackie was doing a lot more driving, but it sure made departure much quicker without having to hook up the tow dolly and ramp the car onto the trailer.

As we crossed back into Eastern Time Zone and into the park we could actually see the sun. Set camp and then put on bathing suits to hop in the clear spring water – a beautifuly clear sand bottom swimming hole that was …. Yikes cold! Maybe 72? Well, it took a little getting used to, but we were swimming at last, looking through snorkels at the underwater spring and nearby bluegill fish. Oops, a late afternoon rainstorm had to remind us that it wasn’t quite over yet, but cleared in time to grill a steak and dry out for a while.  We haven’t even been gone a week and we are in our fourth state park!  But overnight and the next day, Thursday, we had bands of rain and thunderstorms come through, even though the hurricane is now around home in Atlanta.  We did manage a quick dip back in the Spring, which certainly felt refreshing.

So this is Thursday and we hope to go back to PCB and resume our trip back at St. Andrews State Park. However, a call to the park told us they won’t be open until Monday at least, and we only were to stay until Tuesday morning anyway.  Another call to Henderson Beach told us they weren’t sure they would open by Tuesday.  So off to find some wifi (the High Springs public library, on a picnic table outside).  Our best bet might be a private (more expensive) spot in Panama City Beach near Pier Park called Raccoon River.  Might work, but we are waiting on a call back for availability for the next 4 days.  If we can’t book that spot, we might just pack up and head home. 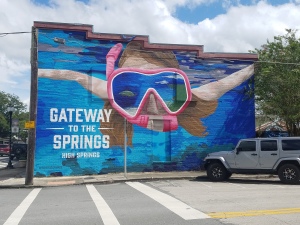 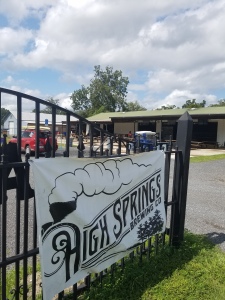 All is not lost, however, as we discovered the High Springs Brewery in town and are busy uploading pictures and editing this blog.  It’s a cute little town and seems to enjoy being the center of “springs” activity.  Oh, and we heard back from Raccoon River and we can stay there the next four nights!  So back to PCB for now and fingers crossed that Henderson Beach will open on Tuesday and we are back on track.

Thanks for following along on this crazy adventure.  More to come. 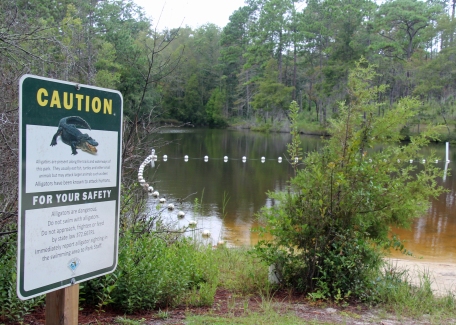 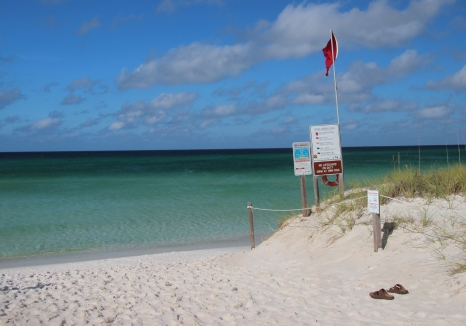 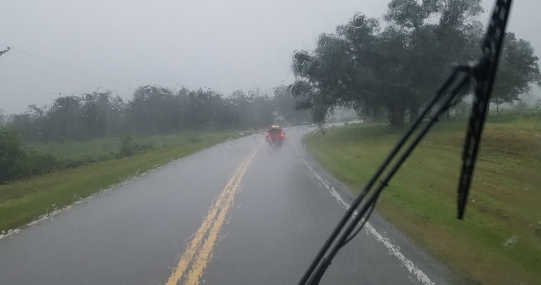 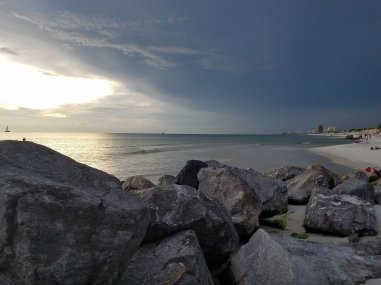 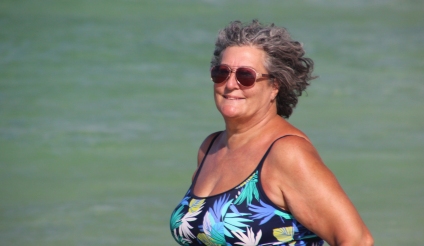 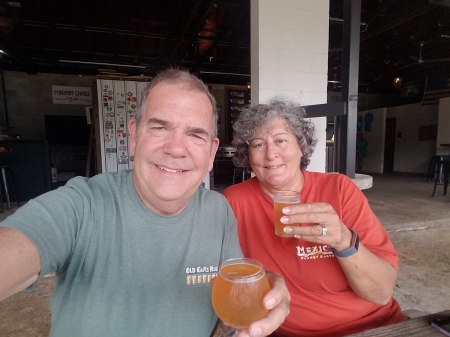 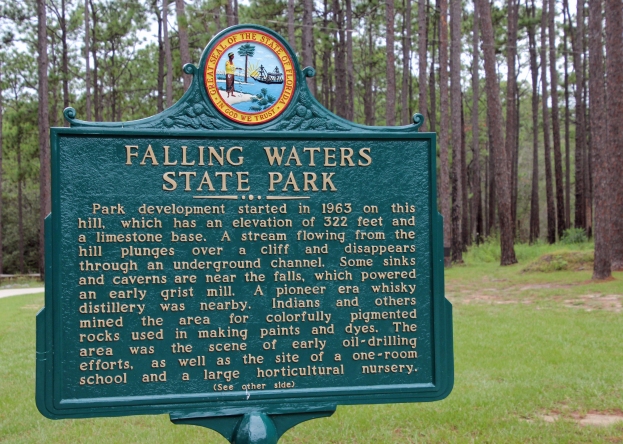 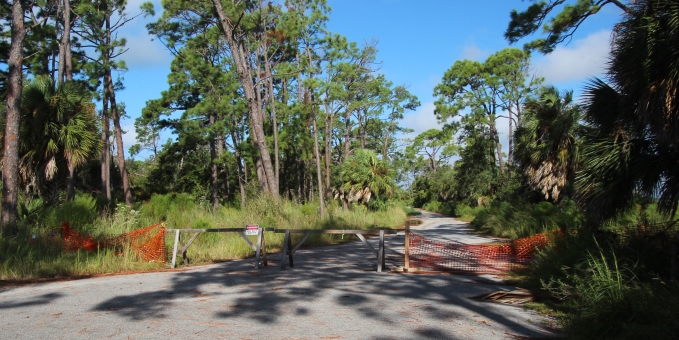 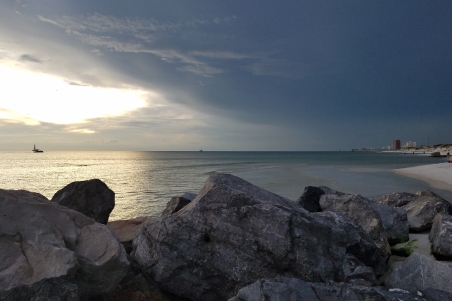 Lake Seminole in the distance