Sounds like a movie sequel or something, right? Or maybe it’s like Harvest Hosts, where vineyards, orchards and farms allow RV owners to stay a night or two on their property to soak in the ambiance of a working farm. No, this is a “working adventure” where we take in the ambiance of helping build a cabin in North Carolina. The kind that builds character and puts sawdust in your hair.

Ok, by now you must have figured that Jackie and I drove the motorhome up to the hills of North Carolina to help her brother John get closer to finishing up his “bucket list” cabin building project, otherwise known as his two bedroom cottage in the woods, Mystic Cabin. We were really pretty excited to help out and had spent the usual few days packing the motorhome, stocking the fridge and fine-tuning the electrical and water systems. Two new front tires on the motorhome were ready for action.

I replaced yet another faucet, this time in the bathroom sink (because it was leaking and needed updating).  So, we cranked up and started to back out of the driveway, only to find the engine running rough and “Low Engine Power” flash on the dashboard.  Hmm.  At the very edge of the driveway I discovered I didn’t have enough power to drive forward, so there we parked (fortunately not blocking the road).

I hooked up the trickle charger on the chassis battery and drove our car to two NAPA dealers in search of a new, stronger battery.  The old one was six years old, so likely not going to keep a full charge.  With the new battery installed, the engine started up with gusto and we started off once again.  Otherwise the trip up took maybe 4 hours on a pretty day with no other problems.  We stayed the first night at John’s current residence and in the morning gathered up a few tools and supplies before driving a half hour or so to his cabin in the woods (actually in a largely undeveloped neighborhood of log cabins). This would be a shakedown of how well his garage and hookups would work for us both this visit and future ones. 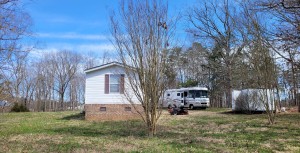 We did manage to get out of his trailer’s driveway without problems (see a previous post where we got royally bogged down in the mud and needed a tow). I was also just a bit concerned about navigating the driveway to his cabin, but it was dry and well-packed, so we were able to squeeze under his big garage, with a bit of the tail sticking out. You will notice that the garage is a work-in-progress, lacking the walls and concrete pad so far. But that is on the to-do list.

First I had to connect a 30 amp box and outlet to his underground power feed and see if that would work for our needs (we disconnected the one at his trailer and brought it over with us). That powered up the motorhome just fine and didn’t pop any breakers, so step one was good. Next step was to connect to his water spigot and see if that would hold without leaks. Looked good, but when John fired up his water pump to draw water from his well, there was a lot of loud shouting from the crawlspace and “shut it down – water is spraying out . . . ” and assorted other choice words about the plumber. It seems several joints had not been crimped and just popped off. So, a trip to Lowes for some PEX pipe and proper fittings let us replace about 20′ of pipe and get the system up and running properly.  Problem solved and we got his newly installed bathroom sink, toilet, shower and our motorhome hookup all running properly with water.  We also got his water heater running later in the week for him to take the first shower (important first-steps). 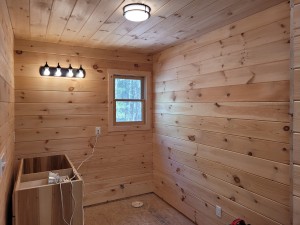 So what was on the working list this time?  Master bath and bedroom needed the tongue and groove pine installed and the outside deck railings needed the top rail added.  We cut the rails of 2×6 for Jackie to sand and stain and then started on the ceiling of the bathroom.  Generally easy cuts and install, but we had electrical boxes to cut out for the fan and several light fixtures.  Over the course of the the week we moved on to the walls of the bedroom and ceiling, with lots of cutouts for the outlets, and finished up, leaving only the window trim to finish.  The handrails on the deck were screwed down and some extra finish trim added to the upper window wall. 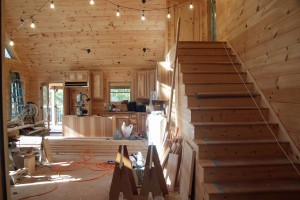 Things really moved along well with us staying on property and the three of us managed just fine in the motorhome.  Weather was clear and dry, getting into the 60’s and 70’s daytime, but unexpectedly cold at night.  We woke the first morning to 26 degrees and a frozen water hose.  Ok, let’s not do that again!  Nothing froze in the motorhome, although the heat pump (electric) switched to gas heat each night (good to know it does that automatically).  We unhooked the supply water hose each night and wrapped the spigot, only using water from our onboard tank until it warmed up — but the temperature dropped to 26/28 each morning before eventually thawing out the hose.

John helped me do a motorhome oil change, once things warmed up one day.  In the cabin we started a fire in John’s firebox/fireplace, which did a great job taking the chill off the workspace.  Even though we were able to grill up some delicious steaks, burgers and sausage each night, it really was too cold to eat outside and we only sat around the firepit one night, bundled up.

John is keeping a slideshow of his progress, updated when he can, so you might want to see what it takes to go from uncleared lot to “final” cabin at Building Mystic Cabin.

Well, it was time to head back home after a week, so before we left we “fed” the septic system by emptying our grey and black water tanks (thanks for the full hookups, John).  Out the driveway and the back gates of the neighborhood and we were on our way on a sunny, blue skies day.  Since the weather was so nice we thought we would try a different route home, one that took us closer to Asheville than Greenville and up and over the mountains.  Heck, the long climb up Mt. Saluda wasn’t all that bad . . . but we soon learned that was the least of it.  Once we made it to Brevard the road became a definite thrill through the mountain towns of Cashiers, Sapphire Valley and Highlands.  I mean the kind of curvy, rhododendron lined, up and down and all around cool kind of road that you would enjoy with a motorcycle or sports car, but maybe not a 33 foot motorhome.   It was pretty rough on trucks, too, as you can see from the curve taken slightly too close.  This one took a while to let us pass.

So the journey showed us all the wonderful mountain retreats, including the towns of Clayton, Dawsonville, Dahlonega, Rabun Gap and Helen in Georgia and around Lake Toxaway, Lake Burton and Unicoi Lake — like a summer vacation all in one day.

Yep, that shortcut took us 3 hours longer and Merlin was quick to point out that 7 hours was a wee bit too long (are we there yet?  meow).  But as we often say, we are retired, what’s our hurry?

Safely back home now, unpacked again and reflecting on trips upcoming and in the recent past.  It was just one year ago that we set off for Florida as the nation started to shut down behind us.  A creepy feeling started to set in as schools, sports, restaurants and bars started shutting down – even the beaches and campgrounds on our last day at Grayton Beach State Park were closing.  What a year, but what hope there is for the year ahead.  We have both been vaccinated, as has Dad, and the restrictions on skilled nursing facilities are being lifted, making an in-person visit possible for our upcoming visit to Hilton Head.

What’s next?  Two family weddings, one college graduation, a week of camping on St. George Island, Florida, (4 more new tires on the motorhome) — and warm sunny days.  Oh, and a new purchase will keep me busy in the kitchen, too. 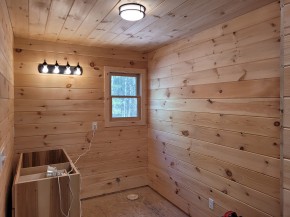 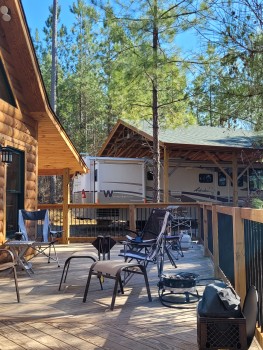 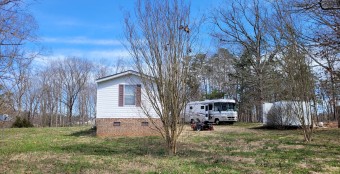 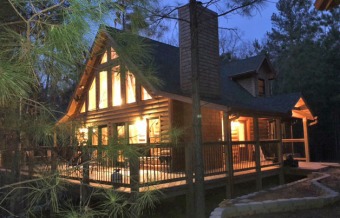 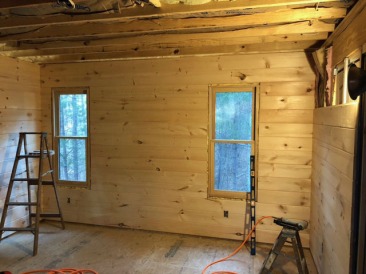 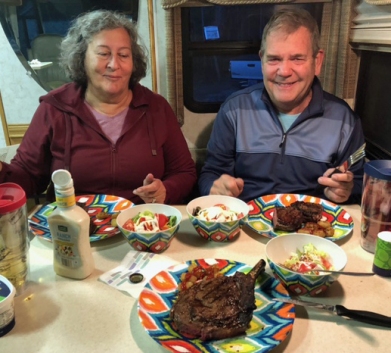