For our first outing of spring 2022 we chose an area of northeastern Alabama that has been on our list for a few years: DeSoto State Park and the Little River Canyon National Preserve.  It was about a 2 hour drive from home, so that was a very easy choice to do a shakedown trip for the start of the year; we are only staying 3 nights.

We unwrapped the RV from its winter cover and in preparation we sanitized the water tank, checked tires and had to replace the valve extension again on one set of rear tires in order to get pressurized.  Aired out and packed up for a short trip, we had layers of clothes and hiking gear, ready for some hiking in either cool or warm weather.  Kodi was in his crate and ready to roll as we connected the Jeep (much easier than the tow dolly) and headed northwest.

The drive took us through Cartersville to Rome and across the hills heading to Ft. Payne, Alabama where we had a pretty steep, steady climb up to the top of Lookout Mountain.  It is part of the Cumberland Plateau, the southernmost extension of the Appalachian Plateau.  It was another slow climb, but soon we crossed the Little River and caught a glimpse of the falls.  A dozen miles further and we were in DeSoto State Park, disconnecting the Jeep and looking for our campsite.  Alabama does a nice job with their campgrounds and the site was level gravel, plenty long enough and faced the woods.  We went through the arrival routine to level, connect electric and water, run out the slides and set up chairs and tables.

It was still early in the day so we went for a hike around the park with Kodi, leaving the campground and trekking to Azalea Cascade, across some boardwalk and then to Indian Falls.  Both were nice waterfalls on a creek that flowed into the Little River below us.  Might have been a mile and a half in the cool, sunny afternoon, but the trail is covered with roots and rocks that reach up to grab your toes if you aren’t careful.  So you look at the scenery when you stop, not while you walk. 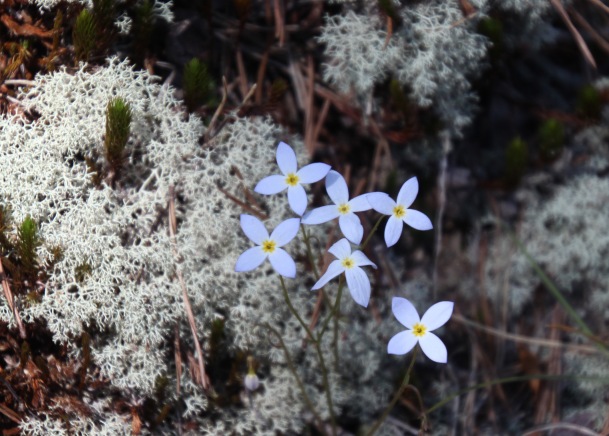 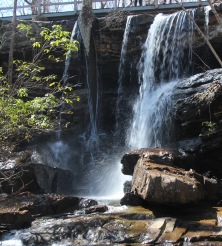 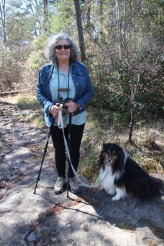 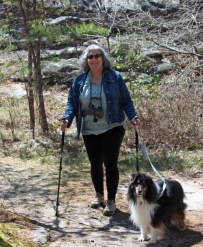 We made our way along the twisty roller coaster roadway to the Canyon Mouth park at the bottom and stopped for lunch.  A narrow trail along the river led to a lovely stream splashing its way to the river’s edge.  It is about a week or two before most of the spring wildflowers will bloom, but we did see some of the early bloomers such as foam flower, bluets, violets, dwarf crested iris, mayapples poking up through the leaves, fern fiddleheads uncurling and a few others that I will have to research.

Back in camp we relaxed a bit before dinner, then enjoyed a deliciously grilled steak with a bottle of red wine and sat around the firepit (our easy propane one) until the stars came out and we got chilly.

On day three we were just finishing breakfast at the dinette when “whoosh” a big visitor flew down to the rotting stump next to us.  It was a bright red and black pileated woodpecker and he was having a nice breakfast of bugs.  Whack, whack into the stump went his beak.  Jackie handed me the camera for a quick shot or two and then he flew closer to a tree that was maybe 4 feet away.  Ok then, guess I will get the close-up.  How wild – even though we have seen the birds on our travels and at home, this one was way cool.

We were set to drive a bit north to see the DeSoto Falls on the West Fork of the Little River so back in the Jeep we went.  When we got to the main observation area for the falls and the picnic area it was closed off for dredging and maintenance, so we turned back about a mile to a trailhead for another spot to view the falls.  This was another trail of roots, bare and rubble rock, and a few places where you had to definitely watch the edge.  But the payoff was a gorgeous view of a waterfall framed by a wide circular canyon wall and a deep plunge pool below.  There were also several private residences and cabins along the upper falls that must have spectacular views all year. 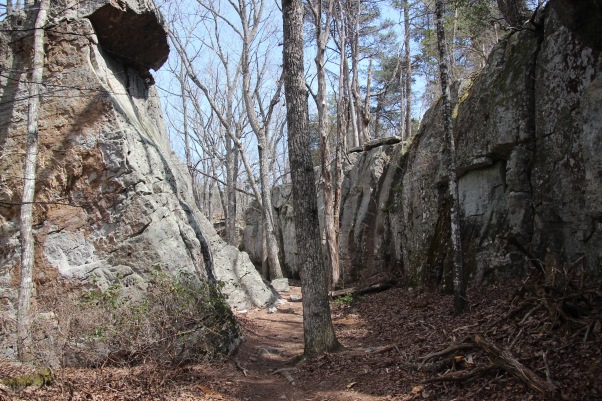 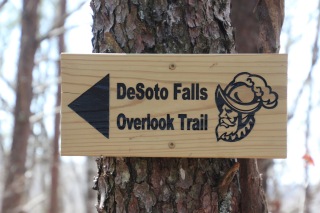 After lunch at camp we trekked our final hike with Kodi to some falls further upstream from the Azalea Cascade in camp.  The trail crossed lots of muddy springs and wet seeps across the exposed bedrock and a couple of stream crossings, but Kodi did fine and we found the Laurel Falls spot, with a half-dozen youngsters and dogs splashing in the pools of water below.  Yikes, it had to be cold.  What fun, though. 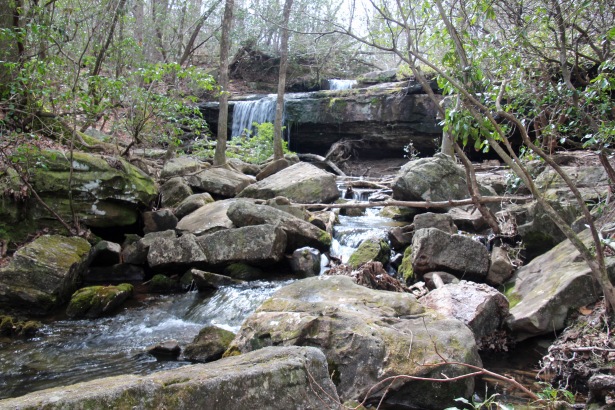