Of Rivers and Wildflowers, Part 2

As we continue to make our way to the Badlands of South Dakota, we have had gorgeous weather. The temperatures have fallen into the 70’s and even as low as 55 degrees overnight in Albert Lea, MN. The view from the cab is dark green fields of soybeans with ribbons of green and golden tassels for the cornfields, punctuated by white and red barns, silver and white silos and many white wind turbines spinning against a bright blue sky. Simply amazing. Yes, lots and lots of corn, from Illinois, through Iowa to Minnesota and into South Dakota.

Home for our RV

Up early and out of F.W. Kent park in Iowa, we headed north to Albert Lea, Minnesota, passing through Cedar Rapids and crossing the Cedar River. Not too far along we crossed the Winnebago River and Jackie quickly searched out the Forest City location of Winnebago Industries. Heck, it was just about 10 miles away, so we made sure the motorhome got to go home and visit. Treated ourselves to a new purchase (two Tervis cups with Winnebago design) after touring their visitor center.  But all that corn was getting to Doug, so we picked up some farm-fresh corn at a farmstand and grilled them later that night.  Melt in your mouth good.

Doug got his corn!

We had booked a site at Myre-Big Island State Park for the night and were just hoping for an easy spot near the interstate. A little nervous, since all they had were back-in sites and we didn’t yet want to unhook the car, but couldn’t be helped. Turned out to be an amazing place. 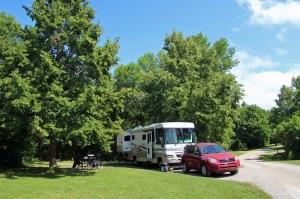 Again, another example of tallgrass prairie with some woodland borders. An early afternoon arrival allowed us time to go for a hike on some well-groomed trails. Gosh, the grass on the trail was far better than my lawn at home. We watched lots of goldfinches on the thistle, but they were too quick for the camera. Tons of colorful blossoms and fruits. Kodi got spooked by some fox scat (droppings) on the trail and we in turn spooked a young doe (yet again the deer). I will let the pictures speak for themselves. 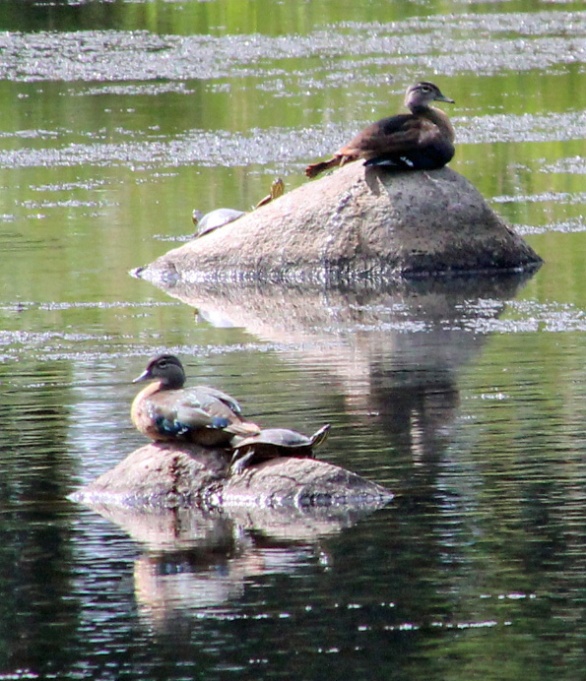 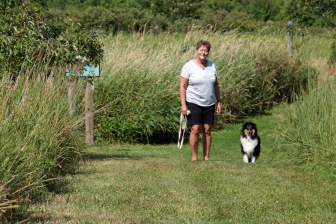 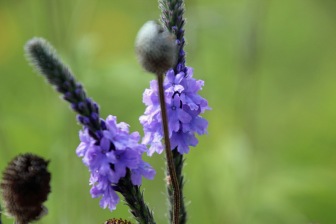 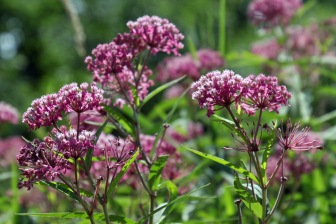 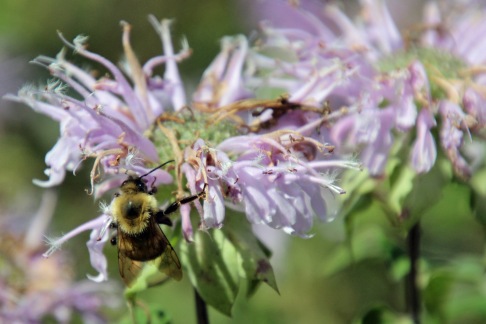 Heading out the next day (yes, 55 degrees overnight!) we had South Dakota in our sights. The interstate was straight, flat and pretty much empty as we drove through the most gorgeous cropland. Once across the state line, we made a stop in Sioux Falls for a visit to the Big Sioux River and the start of our brewery visits. 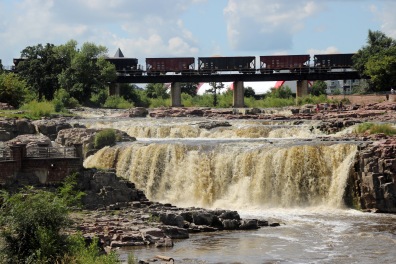 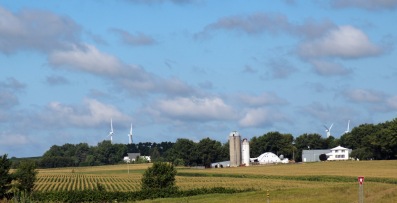 The park along the falls was amazing to see and the several block walk to downtown yielded Prairie Berry Winery and Miner Brewery. Great spot to have lunch and a flight of three beers each (their Irish Red Ale was the best) and we were happy campers. Made some new peeps already: Alan, Jackie and their son Austin. Go figure, Alan was a high school math teacher and his son Austin had just landed a middle school math job (poor thing). Naturally we had nothing to talk about.

We wanted to sample one more brewery three doors down, Monk’s Gandy Dancer. Jackie was just enoying her bourbon barrel aged brew when in walked our new peeps. So the conversation continued. Good people. 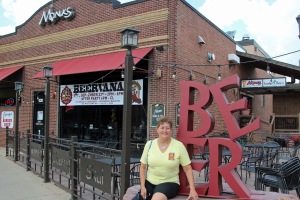 Now that is good public art!

Late afternoon we rolled into the Mitchell KOA, a typical KOA campground, but it does have full hookups to get us ready for no-water sites the next week. Unhooked the car, and drove to Mitchell to visit the iconic Corn Palace. Have a look. 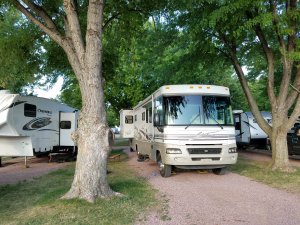 We are off to the Badlands for a few days, followed by Custer State Park, so we are hoping for some good wildlife sightings. Catch up with you later.
The adventure continues . . .

Of Mighty Rivers and Wildflowers

Ok then, we are off on our trip to the West — so it means a lot of driving the first few days.  Also means getting an early start.  I have to admit that my plan for “wheels up at 0600” was thwarted a bit due to darkness.  As I was sipping on my coffee at 5:30am I realized that it was going to be way too dark to hitch up the car on the tow dolly, so it was more like 0800 before we hit the road. We plan to drive around 300 miles each day and find quick pull-thru spots near the main roads.  Don’t even want to disconnect the car from the tow dolly.  Sometimes it can be a KOA or typical RV park, but sometimes we are surprised by the state and local campgrounds we find. 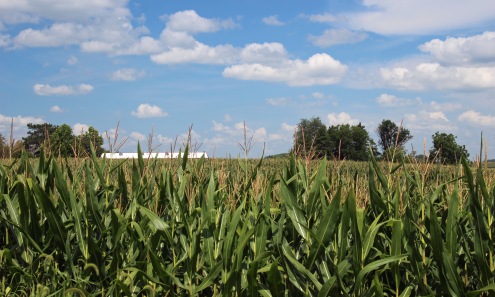 First day was rain all the way through Nashville and into Kentucky.  We camped near Paducah, KY (which incidentally was the filming location for part of How the West Was Won) at a clean, paved RV park that was very quiet and had full hookups.  As we pulled out on day two, we had the best weather for driving through the cornfields of central Illinois – a cloudless blue sky with bright green fields of soybeans and tall corn.  Very flat and just gorgeous. We crossed over several of those mighty, historic rivers that were plenty full of muddy, brown water:  Cumberland, Tennessee, Ohio and Illinois Rivers.  Soon to come was the wide Mississippi.  Driving across and along them, you really can understand the importance of these rivers for transportation and commerce and how they shaped the cities that sprung up on their banks.  Keep playing back those river scenes from HTWWW.

We stayed the second night at an old gathering spot for folks in the late 1800’s, the Weldon Springs State Park.  Very nice campground with only about 15 of us in camp.  Wandering out at dusk, we discovered some beautiful meadows and prairie fields filled with wildflowers.  Naturally, our favorite ungulates were there.  A doe, two fawns and a young buck (hmmmm, wonder if they followed us from home?) were munching in the field keeping a careful eye on us.

Third day took us through more cornfields (seriously, we grow a lot of corn), as we made our way through the rest of Illinois, across the Rock and Mississippi Rivers and into Iowa, where there were more cornfields and rolling hills.  Our evening stop is at F.W. Kent Park, a real gem of a county park.  Since we got here early afternoon, a hike around was in order.  More fields of sunflowers, Queen Anne’s lace, milkweed and a host of other flowers that elude immediate identification.  Did my best to capture a few before the battery died in the camera (of course!) 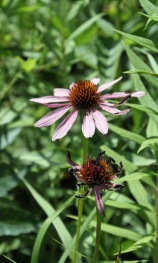 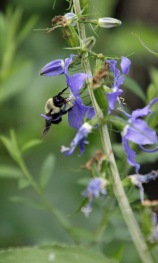 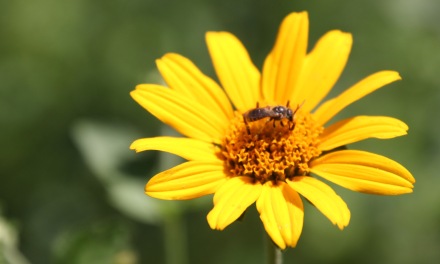 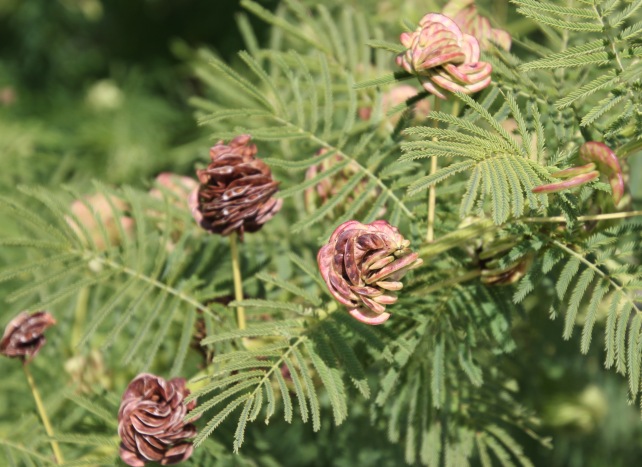 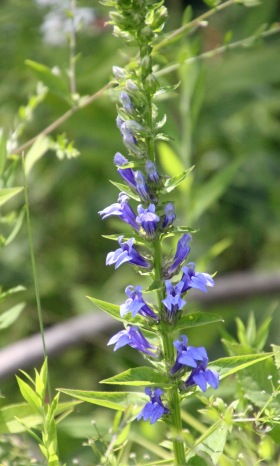 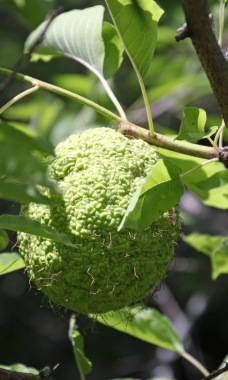 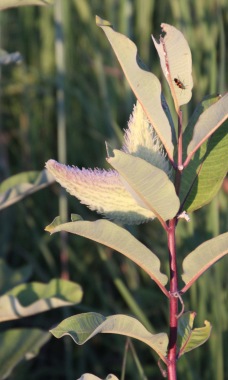 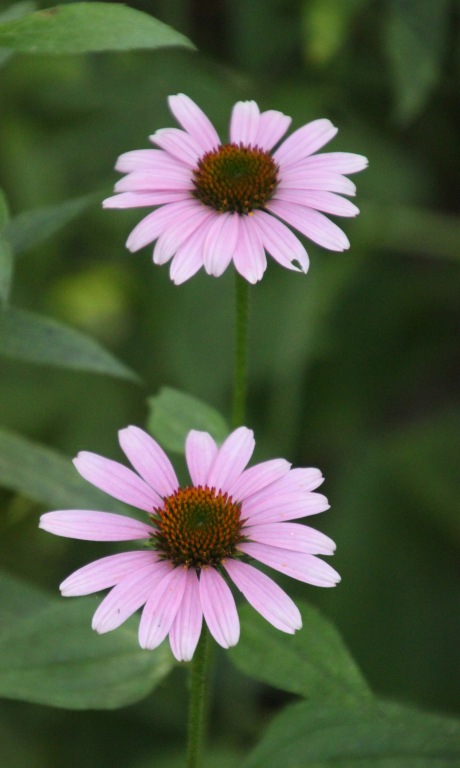 I should note that due to some great advance planning on Jackie’s part, we have been eating good in camp.  First night was mac ‘n cheese with ham, last night was a spinach quiche with smoked sausage and tonight it’s chicken enchiladas.  Yumm.

Next two days take us closer to South Dakota and the Badlands.  I hope to get some good stories and pictures to post.  Not every post is my best work, but at least you will know what we are up to.

More to come, as the adventure continues . . .