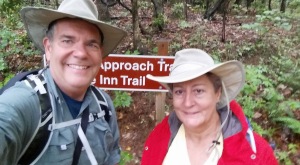 Rainy start to the 5 mile hike

You’re gonna love this post. For our 41st wedding anniversary this year we wanted to try something different and extend our adventures to a Georgia mountains challenge. So we booked a night at the Hike Inn at Amicalola Falls State Park. If you don’t know about this place, let me fill you in. 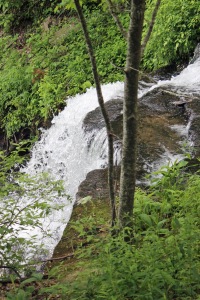 In 1998 the state built their first backcountry inn as a place that you could only reach by hiking 5 miles into the Chattahoochee National Forest from Amicalola Falls. Officially named the Len Foote Hike Inn, it is operated by the non-profit Appalachian Education & Recreation Services, an affiliate of the Georgia Appalachian Trail club.  The inn is just one mile from the Approach Trail that leads to Springer Mountain and the trailhead for the Appalachian Trail. 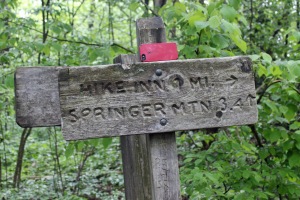 The Hike Inn has 20 guest rooms in four clustered buildings: bunkhouse with lobby and gathering spot, bath house with showers and restrooms, dining hall reminiscent of summer camp, and a library of games, puzzles and sofas with wraparound deck and rocking chairs.  In fact, each building has a wraparound deck for great views. 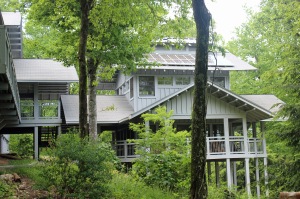 You are provided with sheets, pillow and blankets for your bunk (two to a room) and a washcloth and towel to use in the showers … there were even cloth bathmats!  Afternoon snacks and drinks are ready for you when you arrive, which is a good thing, since you will probably be eager for some of that blueberry crumble or banana bread and iced tea after the 5 mile hike.  Dinner and breakfast the next morning are served family -style for guests.

So you get the picture.  A remote location in the Georgia Mountains that is pretty much on the Appalachian Trail.  An easy way to experience the trail without having to pack in your tent, food and supplies (and didn’t I mention hot showers, too?)  So while we couldn’t bring in a celebratory bottle of Champagne or even a nice Merlot, it was going to be a peaceful, backwoods hike in the mountains.  We hoped to chat up some new peeps and learn about other good day hikes in the area from folks like us — I mean, who else would be there on a Tuesday night in May?  Umm… well it’s a funny thing about being retired teachers: you are never really far from students.

At last! Made it to the lodge.

As we joyously arrived at the end of the hike and stepped up to the lobby check-in, it became apparent that something was amiss.  Where were the seasoned hikers and elders who were ready to tell tales of their favorite treks?  We were surrounded by a class of twentysome 5th graders who were staying the night with us.  Seriously?  Oh yes, there it was.  All the familiar behaviors of middle-schoolers-in-training.

“So, Jackie, let’s go get a glass of iced tea and a snack in the dining room.”  Oh, but of course 5th graders live on sugar and iced tea, so it was slim pickins.  “I hear they have a game of cornhole set up,” Jackie said.  “I really wanna try it out.”  Nah, that location was now some sort of bean bag dodge ball going on.  “Ok, how about that nice porch swing out front?”  Nope, there was a game of musical chairs between the swing and the rocking chairs.  “The library?”  Now that was just too cozy a spot to pass up, if you were a youngster with no internet — so it was a mash-up of Jenga, a half-finished game of Monopoly, a puzzle (?) being worked on by the quiet one and kids flopped about on the comfy sofas.  And did I mention the wraparound decks?  You know, the kind where you can get away from someone who is chasing you and then, like, spy on someone else or maybe, I dunno, cut through the lobby for the fourth time in 15 minutes?  Well, at least there was the 5:00 tour of the buildings to look forward to . . .

Now don’t get me wrong, the location was great, the dinner and breakfast were delicious and there was a group of six other retirees who had hiked in for the night together.  But they were sort of huddled together for safety most of the night.  Oh, and the teachers and parent chaperones for the group (and our teaching buddies will know how that played out) were fun to chat with as we stood at the rail watching the antics around us.  It just wasn’t quite what we were expecting. 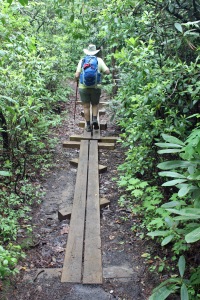 Boardwalk was just that: boards.

As for the hike to the lodge, it was a good workout.  The day started with thunderstorms, but by the time we started the hike it was just all wet, drippy and a bit of slippery mud.  We crossed a few streams and climbed some steep inclines, and saw some woodland plants in bloom.  The mountain laurel that were in bud when we hiked Cloudland Canyon were in full flower here – large groves of them.  The rhododendron had finished, but there were literal forests of them — larger than I have seen.  I would pause to snap a picture, which was a good breather for Jackie, and suddenly we would notice a cluster of something new around us. 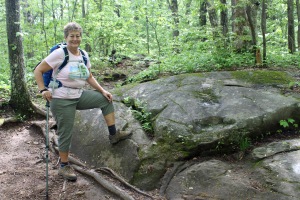 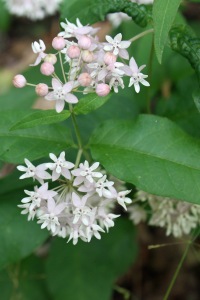 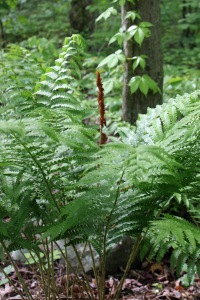 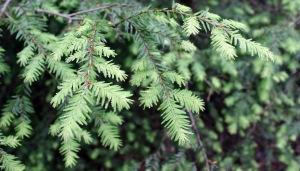 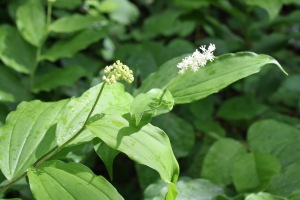 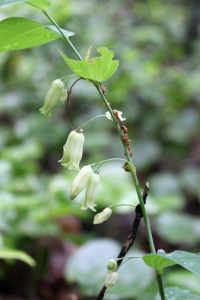 There were patches covered in fourleaf milkweed, a delicate pink-white flower, and other places covered with mayapples.  Galax were pushing out their blooming stalks.  The best photo story is when I stopped to snap pics of club mosses and ground cedar (while avoiding the ever-present poison ivy).  As I stood up, I noticed distinct orchid leaves and mentioned it to Jackie.  She quickly spotted a couple of blooms back off the trail and we saw that they were gorgeous pink ladyslipper orchids.  So I navigated my way through the hollies, briars and poison ivy and knelt down to get a shot or two, awkwardly.  But heck, I got the shot, right?  Well, not 10 feet further down the trail there was a cluster of them right at the edge of the path – perfect location, hassle-free.  Oh, well.  It was a large patch of them, and we easily spotted the pink blooms all around us.  How cool. 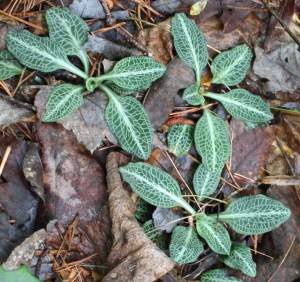 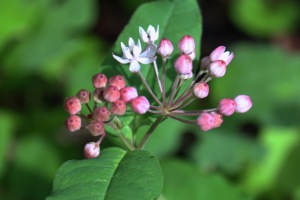 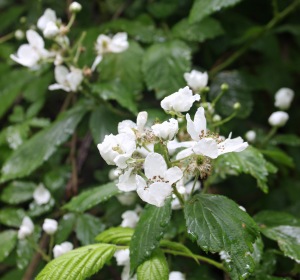 Thump, thump, thump, thump.  Clackety, clackety, clackety (sounded like someone’s carry-on bag being dragged across the decking).  Oh, it was just our 6 am wake-up call, courtesy of the very active, yet somehow direction-challenged 5th graders.  As we finally stumbled out of our bunks, we realized we only had a half-hour to get to the kitchen for a cup of coffee before breakfast would be served to the masses.  Hurry!  Breakfast was worth the early rise — eggs, bacon, grits and peach spoonbread served up hot in a cast-iron skillet.  And we had one we only had to share with two other adults!

After we showered, turned in our linens, filled our water bottles, tucked in our packs, and collected our lunches (which were awesome, by the way) we waited just a bit for the munchkins to get out ahead of us, but it seemed they lingered around and … well, we finally just asked “So which trail are you taking back down?  The Hike Inn trail or the Appalachian Approach trail?  Oh, the Hike Inn?  Great, good luck.”  Any guess which one we took?  Actually, it was a good trail back, seeming to head downhill more than uphill.  We connected with the portion that went on to Springer Mountain and the AT, turned left and headed back down to Amicalola Falls.  It was just a quarter mile longer (5.25 mi), so it was fine.  And quiet.  We got to the bottom of the trail just as the group of six other adults joined us from the Hike Inn trail and we briefly laughed at our shared experience.

So we had a great anniversary after all:  a quiet, romantic night in a remote backcountry inn, surrounded by the night sounds in a National Forest that you can only reach by hiking five miles . . . well, something like that.  I’ll check the Appalachian Trail off my bucket list and try to remember that even though you can retire from teaching, the kids are never very far away.  (you might recall our posting from St. Augustine of last year).

Next trip is our return to Florida and St. Andrews State Park.

Be sure to check out the gallery in Places and some new pictures in Happenings!