It’s pushing 90 degrees with high humidity as I sit to organize my thoughts and photos of our Alaskan adventure, but I am thinking of the cooler temperatures and amazing views of the mountains and waters of Alaska instead.  This seven day cruise with Jackie, my brother Jeff and sister-in-law Vicki was planned out almost a year ago and it exceeded all our expectations and has left us with great memories.  Now to reassemble those thoughts amid the muddle-headedness of air travel and time changes… 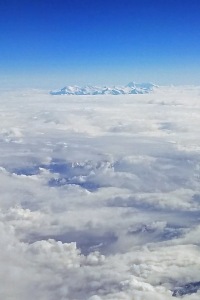 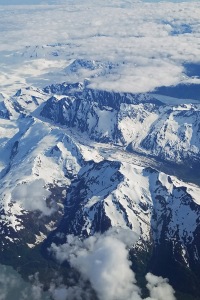 Our June trip-of-a-lifetime had a great start in Anchorage and Seward, Alaska and will continue south through the Inside Passage aboard the cruise ship Celebrity Millennium. 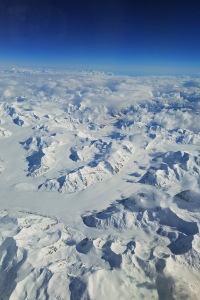 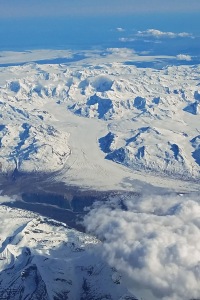 We arrived in Anchorage barely 3 hours after we left Atlanta, but of course that was actually 7 hours of flight time later.  We picked up our rental SUV at the airport and drove into town.  The night was young and we were pumped, after seeing some amazing snow-covered mountains and glaciers from the plane already.  This was going to be great!  We dropped our bags at the Voyager Inn and walked the streets of Anchorage in search of breweries on Doug’s list, plus a recommendation for good eats at Humpy’s Great Alaskan Alehouse.

We found the 49th State Brewery, one of the craft breweries on Doug’s list, and took a seat on the rooftop terrace to sample craft beer and watch locals fishing along the nearby riverbank.  And of course the backdrop of snow-covered mountain peaks still seemed unreal. (Baked Blonde and Prospector’s Gold beers).

Getting up early was no problem, since we were still on Eastern Time, and we tucked into a delicious breakfast at the hotel.  Jeff and Vic were up early in search of a coffee shop, to no avail, but had a nice walk along the waterfront.  I grabbed my camera and wandered about, snapping shots of hanging baskets and … ouch, I rolled my ankle pretty good on a sidewalk crack. Dangit, we had barely started the adventure and already I had an injury!  Oh well, keep moving and carry on. 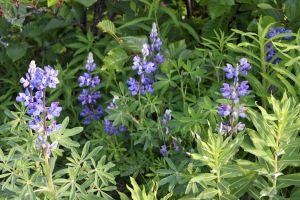 The big day began with our 3-hour drive to Seward along Turnagain Arm (the big bay).  There was almost nobody on the road as we wound around the cliffs and along the rocky shore.  All eyes were on the water for whales, but Vicki suddenly blurted out that she saw something on the rocky cliff.  Off to the shoulder and out of the car, binoculars scanning.  Soon we found the Dall sheep that she spotted, way up on the hillside.  A little further on we stopped at Bird Point to scan the water again, but the excitement was back on the hillside again.  This time there were young Dall sheep among the adults, and not far above us looking down.  Good spotting. 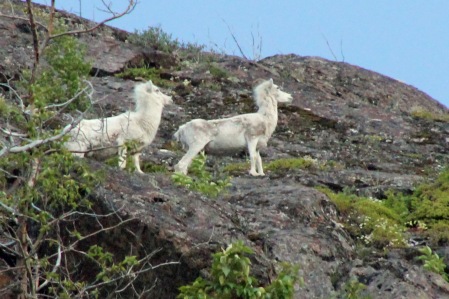 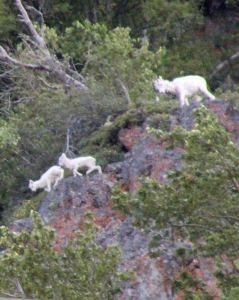 So onward we went, the clear blue skies above, white, blue and green mountains all around us.  As we recounted our sheep spotting, Jeff declared “all we need now is a moose” and just ahead someone must have heard us and pushed out the moose, because a cow and calf appeared out of the bushes at the edge of the road.  No way!  The little guy scampered in and out of the shrubs around mom as she munched on grass and dandelions.  Wow how cool.

The rest of the drive to Seward we tried to muster up some bear, but instead got gorgeous scenery.  We did spot a huge eagle nest with dad standing guard over mom and youngsters in the nest.  Once we pulled into Seward we dropped our bags at the Best Western and headed to the docks for lunch and to check out the departure point.  We sat outside and shared baskets of fried rockfish, salmon, calamari, halibut and cod along with some Alaskan beer.  We walked back along the seawall, past a shoreline city campground and RV park and spotted some sea otters feeding on mussels along the shore.  Suddenly our spotter Vicki said she saw whales off the shore, blowing puffs of steam.  Well, it sure looked like that, so we ran to the rental car, drove out along the shoreline to get closer and had a great look at what we learned were humpback whales, possibly bubble feeding (the gulls were a giveaway).  Wow, what a day for wildlife! 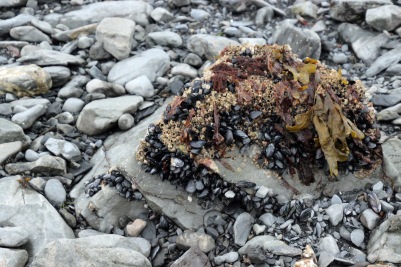 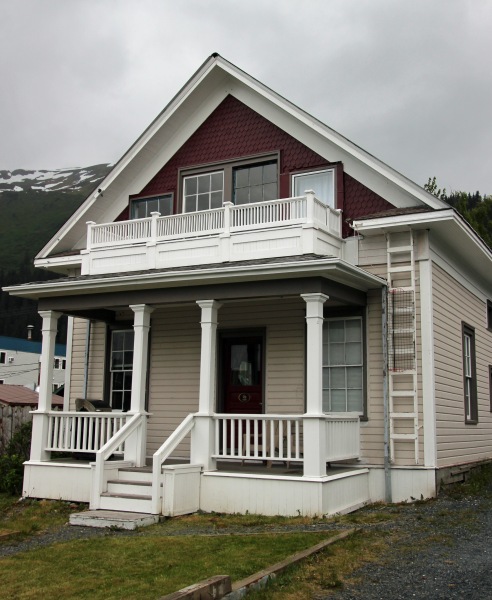 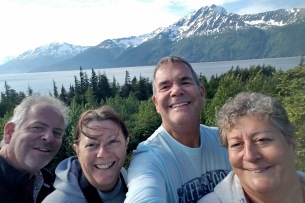 Jeff and I returned the rental car and we met up with Jackie at the van for Stoney Creek Canopy Adventures.  Vic was off to explore Seward by foot and along the seawall again.  Our afternoon zipline was great fun.  There were tons of zips and a few really long ones over ponds and mossy woodlands.  A couple of suspension bridges and two rappels down to earth added to the fun.  I opted to skip the gopro and phone for pictures, since our guides promised to take several shots. 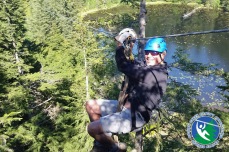 Back down in town we found Vicki, grabbed binoculars and headed out.  Dinner was wood fired pizza and Rockfish Red Ale at Seward Brewing Company, another one of my craft beer destinations.  Good stuff.  We still had time to see eagles and otters and Harlequin ducks along the shore, since sunset was a long way off, plus Jeff spotted Dall sheep on the hillside across from our hotel balcony. 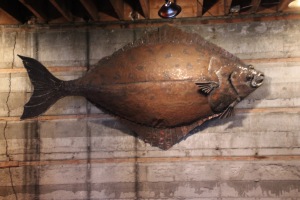 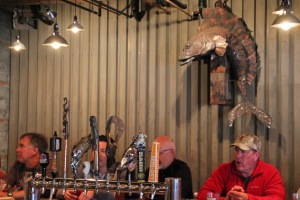 The next morning was embarkation day and it started with another delicious breakfast at the hotel.  We took the town’s free shuttle to the pier and waited for boarding instructions.  It was a dreary, colder and rainy morning, not at all like the gorgeous day before. Fairly soon we had our ship credentials and were headed across a windy, rainy dock to walk up the ramp and onboard the Celebrity Millennium.  Cheers! We were handed glasses of champagne and noticed that we were the first four people aboard.  Ok then, let’s find a cool spot to hang out.  Pool bar was open and not at all busy.  The crew looked like they were fishing in the pool with their yellow slickers and nets – really? 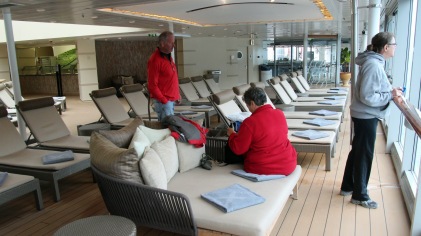 I know we had lunch on deck 10, lots to drink at various bars as we explored the ship, a fabulous dinner in the dining room, a brief rally in the casino (I lost), but all I really recall was our sail away as we passed rocky cliffs and saw swarms of Kittiwake gulls circling and covering them.

Next morning was our day at sea as we headed to the Hubbard Glacier.  We crossed through some pretty bumpy water overnight and the day started cold and rainy again.  Darn, where was that great weather from Seward?

Below decks we had a chance to do the galley tour along with nearly everyone else.  Wow, what a big operation behind the scenes. 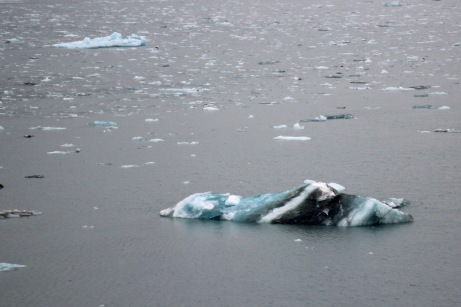 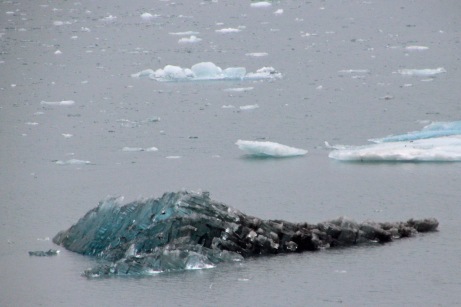 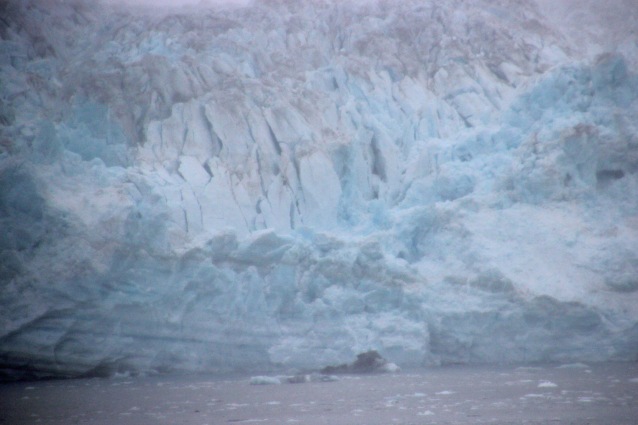 Our approach in toward the glacier was filled with glacial ice and the captain had to make his way gingerly through the icefield.  But the colors of the floating ice were a treat, with the deep blue indicating the oldest, most compact glacial ice and black/grey stripes containing rocks and sediment.  We did have a nice long look at the Hubbard Glacier as the ship spun around and the rain stopped for a bit.  Some of us saw some of the “calving” – chunks of ice breaking off the front.

Heading inside to warm up, we discovered the poolside grill had great burgers and really good fries.  Jeff and Vic opted for the Alaskan Crab Feast while watching the glacier and we all found out that Alaskan Brewing White and Amber ales were a good choice with lunch.

After a bit, it was time to head out to Juneau and hopefully better weather.

Yep, about that weather.  Jackie and I had a morning excursion by helicopter to several glaciers and a dogsledding trip, so we were up and off the ship early.  Just one thing though, the low cloud cover and drizzle meant our helicopter tour was cancelled, no chance at a re-booking later in the day. Drats.  We wandered around town a bit, checking Alaskan Brewing (which was only their storefront), the Red Dog Saloon, complete with sawdust on the floors, then decided plan B would be to book a whale watching excursion. 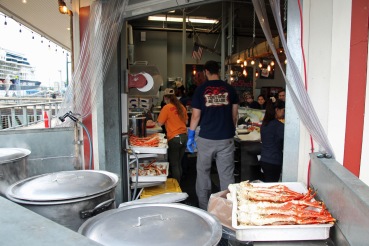 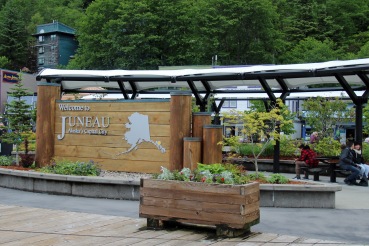 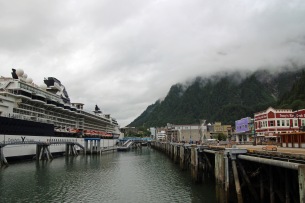 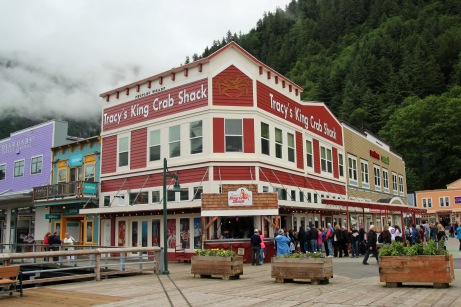 So that afternoon we went on our whale watch, Jeff and Vic went on theirs and we all met back at the ship to trade stories and sightings.  One added benefit was a trip through town, a loop in front of the Mendenhall Glacier and an eagle-filled marsh as we made our way to and from Auke Bay, the excursion harbor. 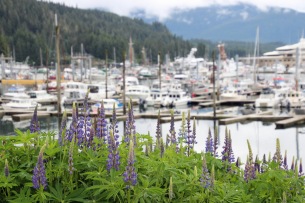 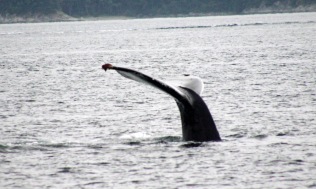 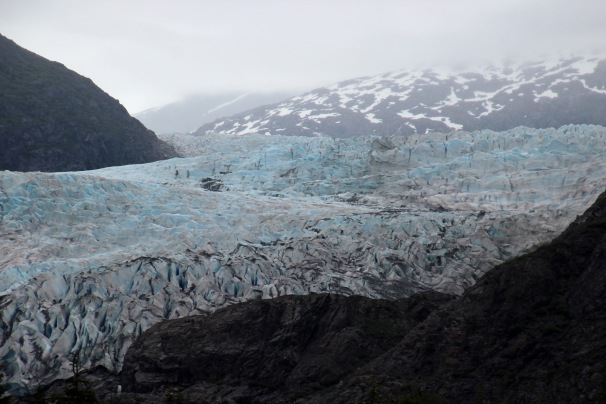 Each of us got to see humpback whales blowing, diving (with great looks at their hump) and tailing.  Several whales and some good sightings.  Jeff and Vic also saw sea lions piled on a channel marker.  It turned out to be a good afternoon.

We really wanted to take the Tramway to the top of Mt. Roberts, but the cloud cover just made that unrealistic.  Another great meal in the dining room, fancy desserts for Father’s Day, visits to the Martini Bar and we were off to Skagway. 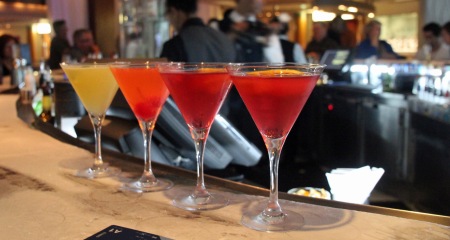 It had been a great cruise so far, and more adventures lay ahead.  Stay tuned, the adventure continues …

Part two of our adventure, from Skagway to Vancouver will follow soon.  By the way, if you are planning a cruise, give our travel agent Cynthia Long (617-587-6000 x 38584) at CruisesOnly a call.  She was a great help booking the trip and getting us some onboard credits and extras.  Mention us and we can earn points.